KUALA LUMPUR - Malaysians hoping for more clarity on who will become their next king after a meeting of the Pahang Royal Council on Friday (Jan 11) will have to wait another day.

A top official of the Pahang state government said the outcome of the Friday meeting will only be announced on Saturday.

Pahang state secretary Sallehuddin Ishak on Friday told reporters who had camped out at the Kuala Lumpur hotel where the meeting was held: "Any decision made today will be announced tomorrow at Istana Abu Bakar, Pekan. That is all."

Pekan is the royal town in Pahang state where its royal family resides.

Datuk Seri Sallehuddin declined to comment when asked about the outcome of the meeting, The Star newspaper reported.

The subject matter of the meeting was not revealed to the media, though it was widely expected to discuss succession to the Pahang throne.

The Pahang ruler is Sultan Ahmad Shah, 88, who is reported to be unwell. 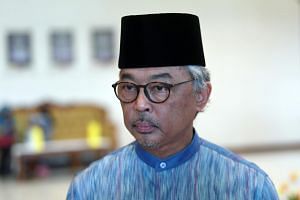 Abdication complicates the making of a king

There has been speculation that Sultan Ahmad could abdicate to make way for his son, Tengku Abdullah, 59, to become the next Pahang ruler.

This in turn could position Tengku Abdullah as the next Yang di-Pertuan Agong (Supreme Ruler), as the Malaysian constitutional monarch is officially called.

The question of who would become the next king arose after Kelantan's Sultan Muhammad V on Sunday abdicated after just two years - three years short of the five-year reign for the king.

The Pahang house is next in line to be picked as the next king, based on a unique rotation system among Malaysia's nine Malay royal houses.

If Pahang declines to take up the throne, the next in line is the ruler of Johor state, followed by Perak.

The meeting on Friday started at around 4pm and was chaired by Tengku Abdullah, who is the Pahang Regent.

Malaysia's Conference of Rulers - comprising the nine state sultans and four governors of states with no royal families (Penang, Melaka, Sabah, Sarawak) - will hold a special meeting on Jan 24 for the purpose of electing the country's next king.

The Keeper of the Ruler's Seal at the national palace, Syed Danial Syed Ahmad, has said that the next king would take his oath of office on Jan 31.