BANGKOK • The Thai army has filed sedition charges against six opposition party leaders who debated possible devolution of some powers to the nation's violence-hit south.

More than 7,000 people have been killed in 15 years of violence in Thailand's "deep south" provinces that border Malaysia. Militants want greater autonomy for the culturally distinct Malay-Muslim region that was annexed by Buddhist-majority Thailand more than 100 years ago.

But the demand is incendiary to Thai nationalists, and successive governments have refused to cede ground on any decentralisation of power in rounds of peace talks.

A seminar last Saturday, held in the southern province of Pattani and attended by academics and opposition politicians headed by the radical billionaire Thanathorn Juangroongruangkit, had discussed the possibility of amending the country's army-written Constitution.

The army filed sedition charges after the debate, which also explored ways to end the violence in the south and devolve some powers, was aired online.

"Parts of the debate contained distorted facts which could lead to chaos, public disobedience or even unrest in the kingdom," a legal expert for the army, Colonel Burin Thongpraphai, told Agence France-Presse after the charges were filed.

Sedition carries a sentence of up to seven years in jail.

Besides Mr Thanathorn and five other leaders from Thailand's opposition bloc, several academics were also charged.

Parts of the debate contained distorted facts which could lead to chaos, public disobedience, or even unrest in the kingdom.

COLONEL BURIN THONGPRAPHAI, a legal expert for the army, referring to the seminar attended by academics and opposition politicians last Saturday. 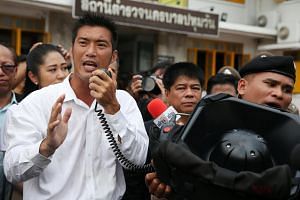 One of those charged - Lieutenant-General Paradorn Pattanathabut, a member of the anti-junta Pheu Thai Party who was former chief of the National Security Council - said the move showed the continued choking of "free expression" despite the end of formal junta rule.

The Bangkok Post reported another Pheu Thai member, Mr Adisorn Piengkes, as calling for the government to withdraw its "delusional" complaint of sedition, because opposition members were not challenging the charter during their discussions.

The party's deputy leader Chusak Sirinil said the sedition complaint was politically motivated. He was quoted as saying that the speakers at the event were only exercising their constitutional right to voice their opinions, and had no intention to provoke disorder.

Mr Thanathorn's Future Forward Party stunned observers by emerging from nowhere to take third place in the March elections, powered by millions of millennial votes and a radical anti-military agenda.

His party is a leading voice in calls for the Constitution to be changed to curb military influence, but has been battered by legal cases.

Mr Thanathorn could also be banned from politics and jailed if found guilty of holding media shares while running for office.

Thailand's junta returned to power as a civilian government after the March elections.

Critics say the Constitution scripted election rules that skewed votes towards army-linked parties, while rivals were banned or tied-up in legal cases.