PH alliance to field rising star in BN stronghold, hoping a win may spur wave of victories in the state

Johor has emerged as a key battleground for Malaysia's political future, with opposition alliance Pakatan Harapan (PH) making an all-out bid for the Barisan Nasional (BN) stronghold of Ayer Hitam, where it will field - and risk the defeat of - its rising star Liew Chin Tong.

Former prime minister Mahathir Mohamad, who lent his star power to the 52nd anniversary bash of Mr Liew's Democratic Action Party (DAP) yesterday, said: "Pakatan Harapan puts people first. We don't put ourselves first. If we did, we'd field Liew Chin Tong in a safe place. But because we need progress, and a strong candidate, we put him here."

Ayer Hitam might well be this year's Gelang Patah, he later told reporters, referring to the BN fortress that fell to the opposition in the 2013 polls and saw it make inroads in Johor.

The state was the site of two high-powered rallies yesterday, with the Malaysian Chinese Association (MCA) defending the BN's track record over the years in Johor Jaya, while the DAP and its PH allies agitated for change in Ayer Hitam, where the opposition alliance this January launched a new election centre.

A win in Ayer Hitam will likely spur a wave of PH victories in Johor and pave the way for an opposition government to seize Putrajaya, said Tun Dr Mahathir and his alliance members in upbeat speeches.

"This is not 'Battleground: Johor'. It is 'Battleground: Malaysia'," said DAP leader Lim Kit Siang, who made history in 2013 when he trounced Menteri Besar Abdul Ghani Othman in Gelang Patah.

But the MCA is unfazed. Its leaders declared at a rally in Johor Jaya that they were confident of defending Ayer Hitam and the state of Johor, which they said has benefited from the ruling coalition's clear plans to drive transformation and the economy.

Party president and Transport Minister Liow Tiong Lai told some 5,000 supporters: "The enemy is on our doorstep. We want to tell them, we will oppose you and fight to the end."

It is not a personal fight. It's a battle between the idea of the status quo and a change for the better.

And PH leaders too acknowledged that Ayer Hitam may prove a harder courtship than Gelang Patah.

Mr Liew will find a formidable opponent in Ayer Hitam's three-time MP Wee Ka Siong, who is deputy president of the MCA as well as Minister in the Prime Minister's Department.

The former deputy education minister has been associated with the development of Chinese-medium schools, a concern of many Chinese voters.

Yesterday, he shrugged off Mr Liew's challenge, saying at a press conference: "This is a democracy, anyone is free to run."

Mr Liew, currently MP for Kluang in central Johor, told reporters in Ayer Hitam: "I'm here doing what most people think is impossible - contesting in a seat which has 58 per cent Malay voters. But I believe that the Pakatan message is acceptable to all."

Dr Mahathir said Mr Liew was placed in a tough area because PH is confident that the people will "choose what's best for them".

To a cheering crowd, he roared: "And what's best for the people of Ayer Hitam is Liew Chin Tong."

Dr Mahathir, who had been hospitalised last month for a chest infection, turned up at the DAP event against the advice of his doctors to show his support as PH unveiled its very first candidate for this year's general election.

Dr Mahathir has had an antagonistic relationship with some of the alliance's members, in the past declaring the DAP to be a party of Chinese chauvinists. But he and other PH leaders - in feisty speeches that took frequent jabs at Malaysian Prime Minister Najib Razak - yesterday called for unity.

Former deputy prime minister Muhyiddin Yassin, who like Dr Mahathir had a falling out with Datuk Seri Najib and now co-leads the PPBM, urged all communities to support PH.

Noting that some Malays may lack confidence in PH, he said: "I assure you that the fortunes of Malays, Indians, Chinese, and of all communities will be looked after under a Pakatan government. We will make sure we are fair...

"Never in the history of the opposition has there been as much unity as we've seen today."

But Mr Liow and Dr Wee slammed the opposition's alliance with Dr Mahathir, whom they called the architect of many of the policies the DAP was opposing. "Pakatan Harapan (Malay for 'pact of hope') is not a party of hope. Now that Mahathir is back, they are Pakatan Hypocrite," said Dr Wee.

Mr Liow, while denouncing the DAP's campaign promise to wipe out his party, pitched the MCA as the party to take care of Chinese voters.

"MCA will always be with the Chinese. We will never give up on trying to fix your issues," he told the overwhelmingly Chinese crowd. "But the DAP doesn't represent Chinese society, doesn't resolve the problems faced by Chinese society, and yet wants to wipe out MCA." 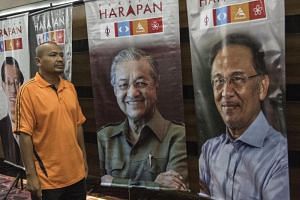 He also criticised Mr Liew for not serving his residents well, citing how they wanted to raise the issue of a double-track railway line for Kluang. "He saw me every now and then in Parliament but he hardly raised anything," said Mr Liow.

The opposition has big ambitions this time around, hoping to win 100 federal seats in the peninsula. It is counting on support for its opposition to the goods and services tax, which it says has raised the cost of living, a key issue for voters.

Mr Liew, who is Johor DAP chairman, said PH hopes to capture at least 10 additional seats in each of the states of Johor, Kedah and Sabah in the upcoming election, widely expected before mid-May.

"Then I think the chances of us winning and forming a stable government will be there," he said.

"It is not a personal fight. It's a battle between the idea of the status quo and a change for the better."

But Mr Liow, the MCA chief, accused PH of sowing discord to win votes, saying BN had boosted Malaysia's economy, security and unity. "I'm confident MCA this time around, even though facing a strong challenge, will continue to get the support of people, especially in Johor," he said.