This is because a local district court will decide only on Oct 25 whether to free him or proceed against him with a new charge tabled by the prosecution, which will make its arguments next Tuesday.

Shoo has been held by Indonesian immigration authorities since April 16 when he was arrested by the navy for trespassing in Tanjung Berakit waters, off Bintan island.

Local authorities refused to release him despite a court clearing him in July of the trespassing charge. Instead, Mr Shoo now faces a fresh charge for immigration offences.

His lawyer Suharjo said on Thursday (Oct 13) that a provisional court will study the prosecution's reply to his appeal for the judges to throw out the case against Shoo on grounds of "irregularity". 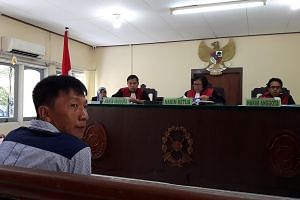 The defence lawyer had argued on Tuesday that the immigration offence Shoo is now accused of, was based on the arrest by the navy, which his client was acquitted of previously. Mr Suharjo argued that the trial was not fair from the start and that the navy is forcing the case, and therefore it warrants a provisional ruling.

Under the Indonesian legal system, a defence lawyer can request for a provisional ruling to challenge a case on grounds that proper legal procedures are not followed. The ruling is made before a panel of judges study the substance of the case.

If the request is rejected, the trial will continue as normal, where witnesses will be called in and any evidence will be presented.

Mr Suharjo said he is optimistic that Shoo will be freed by the provisional ruling because no one should be tried twice with the same case, or in other words, there should not be a case redundancy. 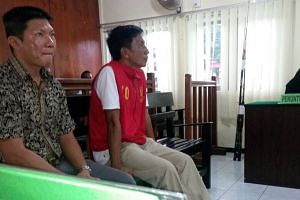 "A case is said to be redundant if the location, the time and the defendant are the same. My client is qualified for this," Mr Suharjo told The Straits Times.

Singapore's Ministry of Foreign Affairs (MFA) had sent a diplomatic note to the Indonesian authorities against the detention of Shoo and had sought clarification on the legal basis for his extended detention.

On Tuesday, Shoo made an impassioned plea during a court hearing for his freedom, saying: "I feel that I have spent enough time in lock-up and I have done my punishment, please don't punish me further."