Malaysian MP stands by remarks on PM Mahathir as others, including her father Anwar Ibrahim, weigh in

Prominent Malaysian lawmaker Nurul Izzah Anwar yesterday stood by comments she made in an interview with The Straits Times in which she voiced her disappointment with the ruling Pakatan Harapan coalition, and referred to Prime Minister Mahathir Mohamad as a former dictator.

Faced with backlash from some quarters over her remarks in The Straits Times and The Sunday Times published last weekend, the Permatang Pauh MP told reporters at a news conference that the phrase "former dictator" was factually correct, and stressed she would continue to speak her mind.

"I did not mean any harm certainly... I will continue to speak in favour of what is right and what is important," she said.

In the interview in Kuala Lumpur with ST executive editor Sumiko Tan and ST's Malaysia bureau correspondent Trinna Leong on March 12, Ms Izzah had said that while she had learnt much in the past year, "my heart's been broken as well, somewhat".

Asked to elaborate on this, she said it had not been easy working with "a former dictator who wreaked so much damage, not just on our lives but the system".

Tun Dr Mahathir, during his first stint as prime minister, had sacked her father Anwar Ibrahim as deputy prime minister in 1998 and later had him imprisoned.

Yesterday, Ms Izzah said: "It is factual from my record... I have said it before the elections, I have said it during (electoral reform group) Bersih demonstrations. I don't understand why saying it at a different (platform), but with the same message, is problematic."

Her remarks in the interview had drawn flak from several quarters, including from within her own Parti Keadilan Rakyat (PKR). 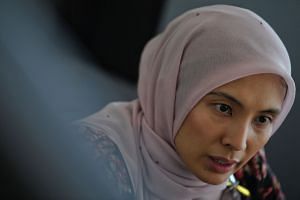 When asked about those remarks on Monday, Dr Mahathir commented that the feeling was mutual. "Never mind, many people are disappointed. I am also disappointed with them," he was quoted as saying by The Star Online at a civil service event in Alor Setar, Kedah. He did not clarify who he meant.

Dr Mahathir's political secretary Abu Bakar Yahya later issued a statement describing Ms Izzah as "immature, irrational and emotional", and said she should not have made negative comments about Dr Mahathir, especially to the Singapore media.

To this, Ms Izzah said sarcastically at the news conference: "When I speak to the Singapore media, I will make sure that I stick to the script; that is the best way rather than sharing my innermost sentiments."

Datuk Seri Anwar stepped into the fray, defending his daughter and also reiterating his support for Dr Mahathir's leadership.

The Malay Mail reported the PKR president as saying: "I think the statement was not wholly aimed at Tun Mahathir, but also directed towards other (leaders) who voiced their opinions and attacked each other."

The prime minister-in-waiting also reiterated that he, his family and PH support Dr Mahathir's leadership, and will give him the space needed to govern effectively.

But he noted that "this does not mean we cannot have differences in opinions, or offer criticism".

Mr Anwar also said the media was giving disproportionate attention to Ms Izzah's use of the phrase "former dictator" for Dr Mahathir.

In the Malay Mail report, he said: "The statements were made during an interview some time ago, and was blown up by the Singapore Straits Times, so why should we quarrel over it?"

PKR leaders had earlier taken Ms Izzah to task for criticising the performance of the 10-month-old PH government.

PKR vice-president N. Surendran had questioned via a tweet whether it was acceptable for her to make such remarks to a leading Singapore daily, "in the middle of the escalating water agreement dispute and a serious ongoing territorial conflict".

Ms Izzah yesterday repeated her view that reforms were taking place at a "sluggish pace".

"It is wrong for me to say that?" she asked.

Economic Affairs Minister Mohamed Azmin Ali, in a Twitter post on Monday, said: "This country needs doers who are prepared to tough it out all the way, not cry babies. Whatever it takes, we must make it work - if you can't take the heat, get out of the kitchen."

Referring to the tweet, widely seen as disparaging of Ms Izzah, Mr Anwar said Datuk Seri Azmin, who is PKR deputy president, needed to cool down and focus on more important issues.

PKR has long been dogged by speculation of an internal power struggle between two factions - one headed by Mr Anwar and the other led by Mr Azmin.