This is the first election led by Chief Minister Adenan Satem, who took over governance of the state from Tun Abdul Taib Mahmud in 2014.

Tan Sri Adenan was cheered on by more than 500 supporters outside a community hall in Lundu, a village west of Kuching, when he arrived to submit his papers just before the nominations closed at 10am. He was accompanied by his wife Jamilah Anu, Prime Minister Najib Razak and Datuk Seri Najib’s wife Rosmah Mansor.

"We come into this election in all confidence that we can win a majority of seats and continue to be the next government," said Mr Adenan, who is president of the Parti Pesaka Bumiputera (PBB). The PBB is a member of the ruling Barisan Nasional (BN) coalition in the state.

He will be defending his Tanjung Datu seat against the opposition Parti Keadilan Rakyat's (PKR) contender Jazolkipli Numan.

Mr Adenan downplayed the opposition PKR and Democratic Action Party's (DAP) chances of gaining ground in the May 7 election, noting that the parties had failed to agree on seat allocations.

"There is some degree of disarray among opposition parties. DAP is contesting against PKR in some seats...I rate the chances of the opposition as very low, judging from the record," he told reporters. 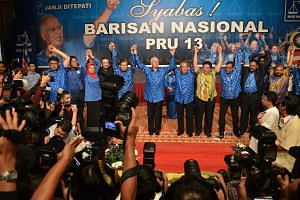 BN victory expected in Sarawak election on May 7

Both are incumbent candidates from the BN-aligned PBB.

Mr Adenan added that the coalition appeared to be in good shape with 82 clear BN candidates and already two uncontested wins.

However, a BN-friendly independent candidate did move to contest against the BN.

On the opposition front, both the DAP and the PKR did not manage to resolve the battle over several seats, resulting in multi-cornered fights in Simangang, Mambong and new seats Batu Kitang, Mulu and Murum.

The DAP and the PKR, which are part of the Pakatan Harapan opposition coalition, also failed to convince former ally Parti Islam SeMalaysia not to contest against them, a move which may result in split votes in Pujut and Muara Tuang among others.

Analysts have predicted an improved showing by BN under Mr Adenan in this election, as his policies such as abolishing tolls and lowering electricity tariffs have resonated positively across voters.

His rising popularity was reflected in a survey by pollster Merdeka Centre released in January, which showed his approval rating at 81 per cent.

Sarawak will head to the polls after a 12-day campaign period, in which 1.14 million registered voters are eligible to vote. That number includes 1.1 million regular voters, 25,022 early voters and 106 postal voters.