Myanmar's ruling party has said the Constitution does not allow anyone to be above the President, in response to a remark by opposition leader Aung San Suu Kyi that she would be "above the President" if her party wins the election this weekend.

"Clearly, according to the Constitution, nobody is above the President. It is not possible. The President is the supreme leader of the country," Mr Htay Oo, joint chairman of the military-backed Union Solidarity and Development Party (USDP), told The Straits Times .

Mr Zaw Htay, an official from President Thein Sein's office, was also quoted by Nikkei Asian Review as saying: "The President is the supreme head of the country, of the people." A President who has to defer to a party leader would be a "problem", he added.

"It cannot happen," he said. "No country would accept that. According to our Constitution, nobody is above the President. How can the Tatmadaw (the army) accept that kind of President? Even other institutions, how could they accept it?"

Ms Suu Kyi, the 70-year-old leader of the National League for Democracy (NLD), made the controversial remark while fielding questions on Thursday from hundreds of journalists at her lakeside residence in Yangon, where she spent many years under house arrest at the hands of the previous military regime.

She told them: "If we win and the NLD forms the government, I will be above the President. It's a very simple message." 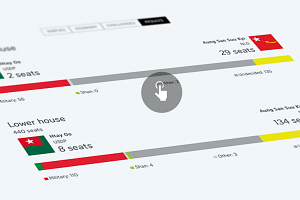 The Nobel laureate is barred from running for President even if her party wins the election tomorrow due to a clause in the military-drafted Constitution which states that the country's leader cannot have foreign family connections. Ms Suu Kyi's late husband was a British citizen, and so are her two sons.

The military, which has 25 per cent reserved seats in Parliament, can block amendments to the Constitution. Ms Suu Kyi has often said that the Constitution was written by the military specifically with her in mind.

The USDP won the election in 2010 and formed a government largely due to a boycott by the NLD. Ms Suu Kyi was still under house arrest then. But this time, pundits expect the NLD to emerge as the single largest party from the election.

Depending on the number of seats it wins - and a landslide cannot be ruled out - the NLD would have a good chance of forming the next government and having a powerful hand in nominating the next President, who would be chosen by a vote by sitting Members of Parliament.

It has already been widely speculated that in such a situation, Ms Suu Kyi would be the real power behind her presidential nominee. But Thursday's remark was her most categorical yet on the issue.

A version of this article appeared in the print edition of The Straits Times on November 07, 2015, with the headline ''Nobody can be above President''. Subscribe
Topics:
More
Whatsapp Linkedin FB Messenger Telegram Reddit WeChat Pinterest Print Purchase Article Copy permalink