KUALA LUMPUR • Foreigners are welcome to buy and own properties in Malaysia, but real estate developers will no longer be allowed to build projects solely aimed at foreign buyers, Finance Minister Lim Guan Eng said yesterday.

"Let me be clear that our Prime Minister does not oppose foreigners buying properties in Malaysia, but when townships are built exclusively for foreigners, how does that benefit the country and Malaysians?

"This the government will not accept," Mr Lim said in his keynote address at the 2018 Annual Property Developers Conference, as quoted by Malay Mail news site.

He did not mention any specific projects but Prime Minister Mahathir Mohamad had, in recent weeks, railed against the Forest City development on four man-made islands in the Johor Strait.

The township had been heavily marketed to mainland Chinese buyers and other foreigners. The project is led by Chinese developer Country Garden Pacificview.

Tun Dr Mahathir said early this month that foreigners can buy residential units at the US$100 billion (S$136.5 billion) Forest City development, but they would not be issued visas to live there.

The Malaysian government is now studying the feasibility of reducing foreign ownership in the Forest City development, Housing and Local Government Minister Zuraida Kamaruddin had said. 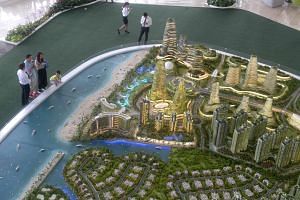 Forest City will eventually house 700,000 people. Some 70 per cent of home buyers there so far are from China. Country Garden said it had complied with all laws and regulations and had the necessary approvals to sell to foreign buyers.

Finance Minister Lim said yesterday that no country would accept the construction of housing projects aimed mainly at foreign buyers. "Don't worry," he told developers. "We are not preventing foreigners from buying your projects. After all, the projects are open and available to everyone, Malaysians and foreigners.

"Foreign buyers buying property is not a problem. We welcome that because, after all, they are bringing money into Malaysia," he said, as quoted by Free Malaysia Today news site.

Mr Lim also refuted claims that the government is being hostile to foreign businesses, saying nothing could be further from the truth.

He said Malaysia welcomes foreign direct investment (FDI) as long as it brings tangible benefits to the people and does not overburden the nation.