PETALING JAYA (THE STAR/ASIA NEWS NETWORK) - An attempt to use durians to lure voters in a Selangor by-election does not smell right to electoral watchdog Bersih 2.0.

It says handing out the durians to voters reeks of corruption, as this is tantamount to an offence under Section 8 of the Election Offences Act for seeking to influence voting behaviour.

Voters for the Sungai Kandis state seat will pick their new assemblyman on Aug 4, following the recent death of the Pakatan Harapan (PH) representative.

The durian party, which promised to treat attendants in Shah Alam city with 1,000 durians from Perak is to be organised by Koperasi Hijrah Selangor, a microcredit programme run by the Selangor PH government.

Bersih sees a thorny problem with the planned treat, saying the initiative is a form of abuse of government machinery as it is in fact a campaign in favour of PH candidate Zawawi Ahmad Mughni.

With durian prices tumbling due to a bumper crop, durian parties have been popular around the country.

But Bersih in its statement said that should the Selangor event be continued, the Malaysian Anti-Corruption Commission (MACC) should investigate it, as allowed under Sections 3 and 7 of the MACC Act. 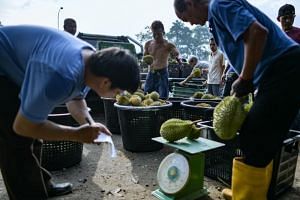 Durian prices drop to lowest at RM1 per unit in Malaysia

"We call on all parties to refrain from the practice of electoral fraud, including impersonation, treating of food, undue influence through dishing out of goodies or threat and intimidation, inciting racial or religious hatred, bribery, including outright vote buying and abuse of government machinery," Bersih said.

It says all contesting candidates should be invited to and be treated equally in any event organised by state agencies.

"Bersih 2.0 reminds the Pakatan Harapan government that the people have voted for change in the 14th General Election - a change from the Barisan Nasional rule of 61 years that was marred by massive corruption, cronyism and nepotism.

"Pakatan should uphold its election manifesto, which promises to cleanse Malaysia of corruption, malfeasance and kleptocracy, Promise 14 on strengthening anti-corruption practices and Promise 17 on ensuring transparency and robustness of our election system," it said.

Three candidates will contest in the by-election, in a battle that analysts say will indicate whether one-time ruling party Umno or the new PH administration holds more sway with Malay voters.

It will be the first by-election since Barisan Nasional (BN), led by Umno, was ousted in the May 9 general election.

The Sungai Kandis state constituency has 51,230 registered voters, of whom 72 per cent are Malay, 16 per cent Indian and 12 per cent Chinese.

Meanwhile, former prime minister Najib Razak said on Wednesday (July 25) that the BN and Umno campaign for Sungai Kandis is not necessarily doomed by the inability to access funds frozen by anti-corruption investigators, reported the Malay Mail news site.

Najib who is in the constituency to campaign, said BN will instead use the "friendly" approach to woo voters for the BN candidate.