He said the agencies were identifying the individuals and sharing information with the Immigration Department so that those individuals would be red-flagged in the system and served with the Not To Land (NTL) notice upon reaching the country.

"Deputy Prime Minister Datuk Seri Dr Ahmad Zahid Hamidi had instructed me not to allow them to enter the country, and I had also conveyed the information to the 137 entry points managed by us.

"The beer festival or gay party is against our country's culture and we will be strict in denying their entry," he told a press conference after meeting with representatives from Malaysia Airports Holdings Bhd (MAHB) and airline operators at the Penang Inter­national Airport yesterday. 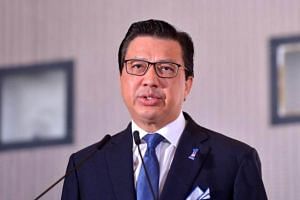 When asked about the details of the individuals who had been identified, Mustafar declined to comment.

He said the list was based on information sharing between agencies on foreigners who were barred from entering Malaysia and Malaysians who had been banned from leaving the country.

On an unrelated matter, Mustafar said about 14,000 illegal foreign workers (Pati) who had failed to register for E-Cards were arrested since Ops Mega was launched nationwide on July 1.

"We also detained 320 employers who are still hiring illegal workers and have taken 100 cases to the court so far.

"I urge employers to register their qualified workers by Dec 31," he said, adding that the department could also freeze the assets and accounts of stubborn employers.

He said there were 1.86 million foreign workers registered with the department last year and the number had reduced to only 1.72 million this year.

"We want employers to make it a priority to fill the vacancies with local talents," he said.

He said illegal workers who surrendered would be deported with a fine of RM400 (S$128.80), but if they were arrested by the Immigration Department officers, they would be brought to court and face a higher fine.