In this article, The Jakarta Post contributors say a mindset shift is needed to encourage Indonesia's elite to be involved in tackling the nation’s challenges.

JAKARTA (THE JAKARTA POST/ASIA NEWS NETWORK) - The election season is upon us and both candidates for the April 2019 presidential election have come out with their broad campaign programs.

President Joko “Jokowi” Widodo and Professor Ma’ruf Amin’s “Continue on the Road to Reform for an Advanced Indonesia” outlines nine strategic focus areas and 45 strategic priority initiatives that will comprise the main focus of the next administration’s efforts to build a more integrated, independent and cooperative society. The Prabowo Subianto-Sandiaga Uno team has issued its “Four Pillars for a Prosperous Indonesia” which includes 36 action programmes to foster a more self-reliant and prosperous society.

On the face of it, both candidates present rather populist agendas. Both identify the need for better infrastructure, better quality social sectors, affordable and accessible financing, accelerated agriculture and rural development, fewer bureaucratic obstacles to enterprise development and the nurturing of information and communication technology, tourism and creative industries.

They would like to see more domestic investment and continued development in the productive sectors. However, both provide fairly tepid calls for measures aimed at combating corruption, including support for the further spread of e-governance.

If there are differences, it seems to be more in tone with the Jokowi team calling for the continued roll-out and deepened reform of initiatives undertaken during his first term, while Prabowo-Sandi call for more of a state-led development process, with state-owned enterprises (SOEs) and state-supported cooperatives directing the economic development process.

Therefore, one can imagine that the financial markets are likely to be reasonably happy with either set of candidates. They are known entities and neither poses any real threat to the entrenched position and privileges of Indonesia’s elite.

Both teams aspire to bring a pragmatic, corporate leader approach to government and both have established strong links in the business community. This translates easily into a business-as-usual stance, without any meaningful pressure to shift away from raw materials and commodities into manufacturing and the export of value-added products, despite the persistent current account deficit.

Are these political strategies, bursting with fine-sounding initiatives, likely to put Indonesia on track for a more prosperous future? That question is hard to answer since neither programme has identified specific performance goals, targets, resource requirements or institutional responsibilities. 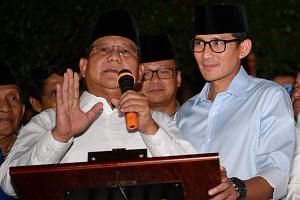 One is left to wonder whether this is yet another case of “politics failure” when candidates promise what they fully know they won’t be able to deliver.

What we do know is that the government’s tax revenue fell below 10 per cent of gross domestic product (GDP) for the first time in 2017, the year in which the tax amnesty was supposed to give a big boost to government revenue. According to World Bank governance indicators, Indonesia in 2017 ranked in the 48th percentile in control of corruption, the 54th percentile for government effectiveness and the 41st percentile for rule of law.

Although Indonesia has reached middle-income levels, its tax to GDP ratio is what one would expect to find in a least developed country that can barely afford to provide basic public goods and services. Moreover, the World Bank governance indicators suggest that Indonesia is still “widely perceived” to be a country with weak government institutions and service delivery, considerable corruption and mediocre application of the rule of law.

To translate this into economic terms, Indonesia’s public sector and judicial bodies continue to be wracked by capacity gaps, and weaknesses in integrity, accountability, transparency and probity. Add to this the fact that the demand for public investments and services far outstrips the capacity of the government to mobilise revenue, and it becomes self-evident that any set of political leaders would be in a real bind. Aspirations they may have aplenty, but their ability to deliver lags far behind.

Certainly Indonesia’s leaders have excellent aspirations, but the realism of their aspirations, programmes and strategic priorities needs further scrutiny.

Until Indonesia is able to double its tax revenue to GDP ratio, it will be essentially impossible to address the nation’s daunting infrastructure gap, to seriously improve the quality of public services, to develop remote and rural areas, or to build a robust social safety net. Unless government pay is brought into line with market conditions, government officials are bound to continue to find ways of greasing their palms to perform their expected duties.

Some (rightly) argue that even if government had all the funding it needs, it would still be unable to spend it effectively because of weaknesses in government institutions. They point to the innovative approach to rural development through “Rural Funds” transfers and ask what these transfers have actually accomplished if rural areas languish and farmers’ terms of trade continues to stagnate?

The appropriate answer here is that there can be no substitute, in the long run, for building government capacity, for establishing an appropriate division of labour between different levels of government and for linking funding to programme performance rather than to simply programme costs or expenditure targets. By the same token, there is a need for the government to recognise that it faces severe capacity gaps in many areas, and thus better cooperation between government, civil society and the private sector is needed to ensure that services are properly delivered.

The real question comes down to the role of the country’s elite. They now control the vast majority of the nation’s financial wealth. They have developed institutional capacities, or an ability-to-deliver, that is far superior to those in the public sector. If tax revenues are to be increased, and increased in a fairly progressive manner, then it is the elite that will have to pay their fair share.

It is also the elite who will have to foster private-public-people partnerships to get decent public services delivered to Indonesia’s people. However, Indonesia’s elite is recognised for being far from what could be described as “public spirited”. While they do endow universities and make large charitable donations abroad, rarely do they display similar benevolence at home.

There is indeed an urgent need for a “mental revolution” such that the elite can be brought on board and encouraged to pay their fair share, to invest time and effort in tackling the nation’s development challenges, and to operate in line with good governance standards. In the absence of such a shift the government will continue to be starved of resources and capacity, while its officials will remain vulnerable to elite capture, irrespective of who wins the next election.

HS Dillon is co-founder of the Centre for Agricultural Policy Studies, Jakarta, and Steven R. Tabor, a former country director of the Asian Development Bank, is the founder of Economic Management and Services International, Leiden.