Newly elected Umno president Ahmad Zahid Hamidi vowed yesterday to give his two main challengers key roles and adopt their ideas to reform the grand old party that is still reeling from losing a six-decade grip on power.

Datuk Seri Zahid won in the five-way contest after getting the votes of 99 out of 190 Umno divisions - one division had its balloting postponed - under the party's electoral-college system.

Two other contenders, who are low-ranking party members, failed to win any divisions.

Mr Zahid was Umno's most senior official after being promoted to deputy prime minister three years ago, when Tan Sri Muhyiddin Yassin was sacked. After former prime minister Najib Razak resigned in May, Mr Zahid became the party's acting president.

Speaking to the media for the first time since winning in the internal polls last Saturday, the Bagan Datuk MP said the party would be restructured to regain its credibility.

"My responsibility is to bring them in and give them a role in taking steps to renew the party," he said, referring to Mr Khairy and Tan Sri Razaleigh. Mr Zahid added that he would consult with other elected leaders in the supreme council - the party's top decision-making body - to try and execute the manifestos of all three presidential candidates in a bid to reform Umno.

My responsibility is to bring them in and give them a role in taking steps to renew the party.

Mr Zahid said in the news conference that he met Mr Khairy yesterday morning to discuss "his role in the mainstream organisation".

Mr Khairy tweeted later to say that he has rejected an offer to serve as the new secretary-general of the Umno-led Barisan Nasional coalition.

The voting involved some 150,000 members with the votes tallied under the 190 divisions. 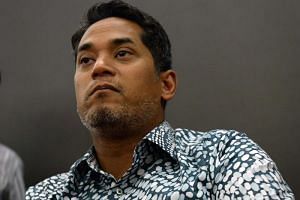 "Many were instructed, threatened, forced to follow the choice of warlords. I want Umno to change. Dump the feudal mentality," the former youth and sports minister said. He was referring to the 191 powerful Umno division chiefs who often decide on the party's direction and its purse strings.

"Popular vote statistics show that majority of Umno members want change. But the ballot system is in favour of warlords who have a strong grip on their divisions," tweeted Mr Khairy.

The victory of many established Umno chieftains at the internal polls left others disgruntled.

Outgoing young women's wing chief Mas Ermieyati Samsudin said yesterday that she has quit Umno to be an independent MP due to the lack of new faces among those elected. She is the third Umno MP to leave since the general election in May, leaving Malaysia's largest party with 51 federal lawmakers. The federal Parliament is set to reopen on July 16 with the new batch of 222 MPs.

"We can evaluate from the reaction, sentiment and behaviour of Umno members that it is still suffering denial syndrome. I believe the current leadership still refuses to accept the reality that the public has rejected Umno, instead presuming that Umno was simply a victim of the people's hatred towards Datuk Seri Najib," Datuk Seri Mas said in a statement.

Aside from a supreme council that is long in the tooth, the party polls also failed to offer a contest for the leadership of 74 out of the 191 divisions.