SYDNEY (REUTERS) - Former finance minister James Marape was elected prime minister of Papua New Guinea on Thursday (May 30), and has vowed to review management of the nation's resource riches.

Mr Marape received 101 votes to eight in Parliament in the capital, Port Moresby, a day after Mr Peter O'Neill resigned, having lost the support of the House after almost eight years in power.

Mr Marape, the critic of a major global gas development deal who hails from the poor but gas-rich highlands of the South Pacific nation, said he would focus on "taking back our economy" and proposed an overhaul of mining, forestry and fishing laws.

"We will look into maximising gain from what God has given this country from our natural resources," he said in his maiden address to Parliament.

"I have every right to tweak and turn resource laws for my country, then it will empower my citizens as well," he told the chamber to cheers and applause.

Political instability is not unusual in the poor but resource-rich country, but Mr Marape's resignation from Cabinet in April tapped growing concern over governance and resource benefits not reaching the poor.

Mr Marape told a news conference after he was sworn in at Government House that any changes to laws would not be retrospective. 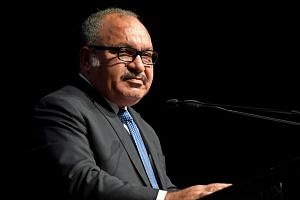 But he had previously questioned an agreement with French oil company Total in April, which allows Total, Oil Search Ltd and ExxonMobil Corp to begin work on a US$13 billion (S$17.9 billion) plan to double gas exports.

"We are not here to break legally binding project agreements," he told reporters when asked if he would consider reviewing another gas deal which Exxon critics say has failed to benefit landowners and the government.

However, he added: "If we find any project agreement... that has not fully complied with proscribed provisions of law, then we are open to reviewing and scrutinising them."

"We are not about breaking laws. We are about honouring existing laws," he said.

Exxon has said it does not comment on politics. Oil Search and Total did not immediately respond to requests for comment.

"He was finance minister so understands need for clarity and stability in policies," Mr Isikeli Taureka, chairman of Kinabank and a former oil and gas executive at Chevron and InterOil, said in a text message.

"I believe he is rational and seems to lean towards respecting and grandfathering current agreements," he said.

The political uncertainty has knocked almost 6 per cent from shares in Oil Search, an Australian partner in large liquefied natural gas developments in PNG, since the challenge to Mr O'Neill gained traction last week.

Oil Search shares climbed in early trade, but turned negative after Mr Marape's election to trade 0.7 per cent below Wednesday's close in a falling broader market.