In this article, the writer says although the country's pivotal general election brought hopes and expectations of a New Malaysia, change – especially in terms of race and religious issues - will not happen overnight.

PETALING JAYA (THE STAR/ASIA NEWS NETWORK) - We may have heralded a New Malaysia, with the euphoria still lingering, but more than three months have passed since the general election which saw the Barisan Nasional government crushed.

A new social landscape, perhaps, but Old Politics still haven’t faded away. As much as most of us loathe the politics of race and religion, the practice is a numbers game.

The politicians who have mastered the game understand the stakes, and they skilfully manoeuvre into positions to ensure their audience is convinced that their interest is protected.

The figures speak for themselves – about 95 per cent of Chinese voters chose Pakatan Harapan (PH) in the May 9 general election and more than 85 per cent supported the now-defunct Pakatan Rakyat coalition in 2013, revealed a report. About 70-75 per cent  of Indians voted for PH.

Although a higher percentage of Malays voted for PH in Johor and in west coast states including Melaka and Negri Sembilan, PH’s overall Malay support dwindled because of its weak performance in Kelantan and Terengganu.

The report, quoting analysts, said the split Malay vote means PH leaders must tread carefully when framing issues deemed sensitive to the Malays, if they expect to gain their trust.

And Umno and the Parti Islam SeMalaysia (PAS) will try even harder to woo the Malays by using the familiar baits of race and religion, they said.

Explicitly aware of the apprehension of many Malays, especially over the appointments of non-Malays in key government positions, and the notion that the Democratic Action Party has an upper hand in the PH government, the Prime Minister and other leaders had to convene for a special bumiputra meeting.

They read the ground sentiment well – that only 25-30 per cent  of Malays voted for PH, but which was enough to kick out Barisan, and if this tiny fraction switches allegiance from PH, there’s bound to be trouble ahead.

Barisan, particularly Umno, also understands this figure’s significance, and has been quick to align itself with PAS in the name of race and religion. That’s simply because there is a huge Malay electoral market that buys into such line of politics. 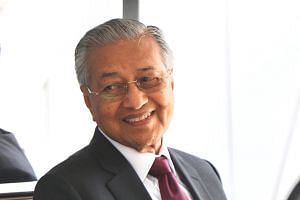 100 days under Pakatan: Tough times for Umno in the opposition

So, Prime Minister Tun Dr Mahathir Mohamad had to provide the assurance that the Government was not out to persecute bumiputras, but instead, wants to ensure that a fair and equitable solution is in place for the betterment of the community.

He reminded the Malays that in the past, many business opportunities had been given to bumiputras under the New Economic Policy, but many sold their contracts and approved permits (APs) for healthy profits.

“As long as we look for shortcuts, we will not succeed,” he said at the Future of the Bumiputra and Nation Congress 2018 earlier this month.

He said such handicaps didn’t help them in the end because they continued to be paupers after spending all the money instead of investing, while those who retained their contracts and APs became successful.

Last week, Datuk Seri Anwar Ibrahim made a clarion call on the importance of Bahasa Malaysia and reaffirmed the position of the national language at Dewan Bahasa dan Pustaka, the government body responsible for regulating the use of the Malay language and Malay-language literature.

The incoming president of the Parti Keadilan Rakyat - a member of the PH alliance -  urged all leaders and MPs to buck up on their Bahasa Malaysia, chiding those who had not made the effort to master the national language.

“Whether you like it or not, parliamentary proceedings are in BM. Proficiency in the language is crucial.”

But he also said that emphasising BM did not “mean that other languages such as English and Chinese were marginalised but must be mastered as second languages.”

This was a master politician at work, making sure to cover his bases.

Also, he warned of the existence of a so-called “super liberal” group in the country, which he said strongly expressed its demands and pushed for their implementation.

Without making specific references, he said the people from this super liberal group also denounced the views of those opposed to it.

“When we criticise them, we are attacked as if this country belongs to them. I tell them that we represent the majority in the country and we argue that in this country, we are also entitled to voice our views.

“They think that we must accept their views. If I touch a little on Islam and the Malays, they will raise an argument.”

Certainly, Anwar’s words would earn him brownie points among the conservative Malays, who aren’t necessarily rural voters. In fact, they are urban Malay professionals who aren’t happy with what they perceive as radical changes to the status quo in the name of New Malaysia.

Even the Sultan of Johor, Sultan Ibrahim Sultan Iskandar, voiced his annoyance after an official letter by an Iskandar Puteri City Council (MBIP) member written in Chinese and English went viral.

Sultan Ibrahim decreed that any official letter involving the state government or local authorities in Johor must be written in the national language.

“If the councillor does not know how to do his or her job, just resign. This is my warning do not make this mistake again.

It was later clarified that what appeared on social media “did not paint the full picture” as the councillors had, in fact, written in three languages – English, Malay, and Chinese.

Dr Mahathir has also found it necessary to do a balancing act. First, he issued a statement saying the Cabinet felt the caning of the two women convicted of lesbian sex in Terengganu gives a bad impression of Islam, and that it “did not reflect the quality of justice and sympathy in Islam”.

But he was also quick to follow up with an assurance, especially to the Malays, that Malaysia doesn’t accept LGBT (Lesbian, Gay, Bisexual and Transgender) practices and same-sex marriages as the country eschews these Western values.

He said even though the government respects the recommendations made by the Malaysian Human Rights Commission (Suhakam), it would not accept “everything”.

Both Anwar and Datuk Seri Dr Wan Azizah Wan Ismail have also made their stand clear, although their critics have attempted to put them in conflicting positions.

The LBGT issue is a big “no” within the Malay community, likewise with many Malaysians of other faiths. It is tolerated but not to be advocated – that is the line.

And Malay PH politicians walking on the fine line of 30 per cent votes understand that they need to retain this support, and likely, increase it, which will hopefully take shape in the form of new voters turning 18 years old by the next GE.

The New Malaysia has given rise to new hopes, new expectations and new ways of doing things, but in the end, some things will just never change – at least, not overnight – and until then, our countrymen and women must learn to handle all of this more tactfully to pave the way ahead.

Wong Chun Wai began his career as a journalist in Penang, and has served The Star for over 27 years in various capacities and roles. He is now the group’s managing director/chief executive officer and formerly the group chief editor.

The Star is a member of The Straits Times media partner Asia News Network, an alliance of 23 news media organisations.