Several chief ministers-to-be sought audiences with state rulers across Malaysia yesterday, bringing them closer to being sworn in to helm governments in their states.

These chief ministers, known as menteri besar, are nominated by the winning party or coalition, and must get the consent of their state's sultan or governor.

While eight of the 12 state elections held on Wednesday yielded clear winners, only three menteris besar - in Kelantan, Terengganu and Selangor - had been formally named as of last night, a day after the opposition's shock victory.

Two chief ministers were sworn in yesterday, both in states won by PAS. PAS commissioner  Ahmad Yakob, who led the party to win 37 of Kelantan's 45 state seats, was sworn in for a second term. Dr Ahmad Samsuri Mokhtar was sworn in as Terengganu's chief minister.

Over in Selangor, the state's Sultan met and consented to the appointment of Parti Keadilan Rakyat deputy president Azmin Ali as chief minister for a second term. 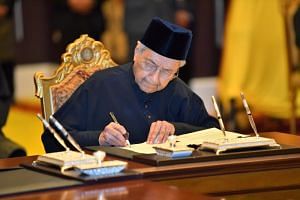 Malaysia election: May renegotiate some deals with China, says Mahathir

ESM Goh salutes Mahathir for 'indomitable will and energy'

No date had been set for the swearing-in of Penang's chief minister or the formation of its state government. State news agency Bernama reported that the reason for the delay was that several state leaders were in the federal capital with other Pakatan Harapan (PH) leaders to attend functions associated with the setting up of the federal government.

BN's chairman in Pahang, Mr Adnan Yaacob, said the state's chief minister will be appointed after approval from the palace is sought.

The coalition's Perlis chairman also said the state's chief minister was still being decided on.

The three states which swung to PH also did not have confirmed chief minister candidates.

PH was awaiting an audience with Negeri Sembilan's ruler to form the next government, the coalition said in a statement.

Johor also yielded no names, but outgoing chief minister and BN state chief Khaled Nordin said the coalition accepted the election outcome - PH won 36 out of 56 state seats - with an open heart. "The voice of the people must be respected in a democratic country," he said yesterday.

Johor Sultan Ibrahim Iskandar said the people's verdict should be respected, and that he was willing to work with the new state government led by PH. "I hope a new menteri besar can be sworn in immediately in Johor," he said.

It was less clear who will form the state governments in Kedah, Perak and Sabah, where there were shifting alliances or no outright majorities. The parties themselves have to decide, said the Election Commission. "It depends on the respective party to discuss. We cannot determine who should form the government," the commission's deputy chairman Othman Mahmood said at a press conference.

In Kedah, where PH won 18 - exactly half - of the 36 state seats, the palace postponed the appointment and swearing-in of the new Kedah menteri besar. The ceremony was initially scheduled for yesterday.

In Perak, PH was short of one seat needed to form the state government, but said it would seek the consent of the Sultan to do so.

Sabah, where both coalitions won 29 seats each in the 60-seat assembly, saw intense horse-trading.