KUALA LUMPUR (AFP) - Malaysia may have absolved its prime minister in a huge corruption scandal, but the authorities in other countries investigating suspicious global fund flows are making clear the affair is far from over and that the net may be tightening, say observers.

Malaysia's attorney-general last week cleared Prime Minister Najib Razak of wrongdoing in accepting a mysterious US$681 million (S$974 million) payment from overseas, sparking accusations of a cover-up in the case.

"But this is definitely far from over and looks like the noose is tightening on Najib," she added, referring to the new details announced by the Swiss and Singaporeans.

Within days of Datuk Seri Najib's clearing, the authorities in Switzerland and Singapore raised the pressure, pointedly responding that investigations into an array of Malaysian money movements were forging ahead and releasing new information.

The Swiss attorney-general's office last Saturday (Jan 30) revealed that it believed US$4 billion had been pilfered from Malaysian state companies, and on Monday (Feb 1), Singapore announced it had seized a "large number of bank accounts" as part of investigations into a company closely linked to Mr Najib, 1Malaysia Development Berhad (1MDB).

Observers said the timing and tone of the Swiss and Singaporean statements appeared to indicate concern that Malaysia may seek to bury the issue.

Malaysia has been rocked by allegations that huge sums of money were diverted from 1MDB, an investment company, and the revelation last July of the US$681 million payment to Mr Najib.

Last week, Mr Apandi declared there was no need for Malaysia to cooperate with the foreign authorities on Mr Najib's donation. 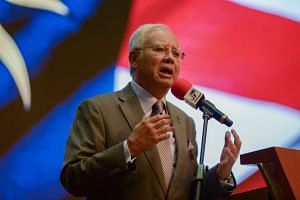 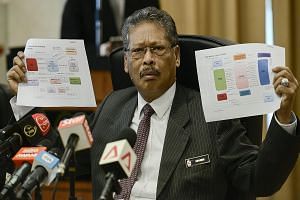 Mr John Malott, a former US ambassador to Malaysia, called that a "very unfortunate statement" that likely caused anger overseas.

"Basically he was telling the rest of the world to drop dead, and the Swiss and Singaporeans have replied that 'maybe you think its the end, but we don't'. The timing of their responses was just too close," he said.

Mr Malott said Mr Najib now "must really be sweating" over whether American authorities - reported by US media to be investigating - will make an announcement, which they usually withhold until a solid case is built.

However, the recent Swiss and Singaporean announcements are already seen as raising the pressure.

Since last year, Mr Najib's government has arrested whistleblowers and purged his leadership of critics.

That has left the threat of foreign action - the authorities in the United States and Hong Kong are also said to be investigating - as Mr Najib's primary concern.

Switzerland had announced last year that "tens of millions of dollars" in suspicious assets had been frozen, and that it had opened criminal proceedings against two former 1MDB officials and "persons unknown" suspected of bribery, money-laundering and other crimes.

On Saturday, the Swiss attorney-general's office revealed that up to US$4 billion may have been stolen from Malaysian state firms, with a "small portion" transferred into Swiss accounts held by current and former Malaysian and United Arab Emirates officials.

Requesting Kuala Lumpur's help, it added that the Malaysian companies concerned have oddly made no comment on their alleged massive losses.

Singapore said on Monday it was "actively" probing allegations of money-laundering related to 1MDB and was communicating with Malaysian, Swiss and US officials.

A joint statement by the Monetary Authority of Singapore and police said: "Singapore does not tolerate the use of its financial system as a refuge or conduit for illicit funds."