Malaysian PM's show of his softer side may win over young urbanites: Analysts

In a departure from previous practice, Prime Minister Najib Razak this year opted to deliver his televised National Day message not from a lectern, but in the "relaxed, informal and more friendly" environment of a townhall session attended by Malaysians from all walks of life.

In the 45-minute pre-recorded segment broadcast after yesterday's National Day parade in Kuala Lumpur to mark Malaysia's 60th year of independence from British rule, Datuk Seri Najib is casually dressed and talks about how his childhood memories of playing with firecrackers and climbing guava trees were just like those of his fellow citizens.

When student Samuel Chau Jun Hao asked Mr Najib about the challenges of becoming a prime minister for all Malaysians, he bantered: "It's difficult, Samuel. Look at my hair." On a more serious note, he added it was not easy to be a prime minister in a country with diverse races, religions and cultures, but he was proud that people were able to live in harmony with respect for the Constitution and the Rukunegara, the national principles.

Political analysts say the savvy politician is hoping to appear more approachable, and shed his image of an embattled leader hit by allegations of financial mismanagement at state fund 1Malaysia Development Berhad (1MDB). Mr Najib has been cleared of any wrongdoing by the Malaysian authorities.

"It is like an image makeover. Najib is projecting himself as a leader with a softer, friendlier image and downplaying the face of a leader under siege," said Mr Yang Razali Kassim, senior fellow at the S. Rajaratnam School of International Studies. "In so doing, he is shifting the focus from party-driven politics to personality-driven politics."

With the next general election due to be held by August next year, townhall sessions are his latest weapon to court the urban electorate who largely voted for the opposition at the last polls. 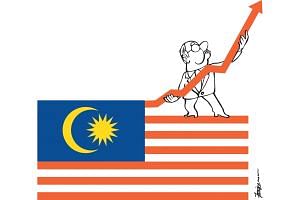 Najibnomics has been good for Malaysia's economy

THE MEANING OF MERDEKA

The truth is when our country achieved its independence, I was only four years old and certainly I cannot remember the moment that has become very meaningful to us all.

I can still remember cycling up and down the hill, going to school, playing fire crackers, climbing guava trees, like any other youngsters. I was born, grew up like other Malaysian children.

Meanwhile, his ruling Barisan Nasional (BN) coalition inspired a spirit of nostalgia at the parade, with Merdeka Square made over to resemble the site at which Malaysia's first prime minister, Tunku Abdul Rahman, declared independence on Aug 31, 1957.

Mr Najib and his colleagues donned yellow khaki uniforms reminiscent of the 1950s, while a vintage car complete with an actor resembling the late Tunku Abdul Rahman was rolled out.

Also present were two former navy servicemen who, 60 years ago, hoisted the Malaysian flag for the very first time.

Analysts say this unique display could well win over the urban millennials .

"It's a generation that's apolitical. BN has the resources to pull off events that are seen as cool," said Dr Oh, adding: "So if they do come out to vote, it goes to BN."