KUALA LUMPUR (THE STAR/ASIA NEWS NETWORK) - Former prime minister Najib Razak arrived at the Jalan Duta Courts Complex at 9.20am on Friday (Oct 19) in a white Toyota Vellfire to give his support to Ahmad Zahid Hamidi.

Zahid had earlier arrived at the Courts Complex to answer multiple charges, including corruption and money laundering.

Najib, clad in purple batik shirt, walked into the court room just before the charges were read out.

The former premier took a seat in the front row.

The defence lawyers are Hisyam Teh Poh Teik and Kitson Foong.

A slew of Umno members were present in court to show support for the Umno president, who arrived at the courthouse at about 8.15am. 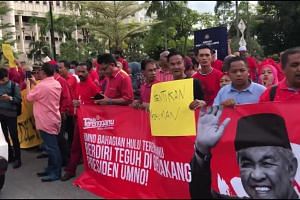 Zahid's wife Hamidah Khamis as well as his daughter and son were also present.

The steady stream of family members and friends of the former deputy prime minister into the courtroom made it necessary for the police to increase the number of seats to accommodate them.

On Thursday, investigators arrested the 65-year-old former deputy president at 3.15pm. Zahid was being investigated over allegations of misappropriation of funds belonging to Yayasan Akalbudi, of which he is the chairman.

Graft busters had grilled Zahid four times before he was arrested.