Former Malaysian prime minister Najib Razak yesterday pleaded not guilty to three charges of money laundering related to payments from SRC International (SRC), bringing the number of criminal charges against him to seven.

The Pekan MP stands accused of receiving a total of RM42 million (S$14.1 million) in proceeds of illegal activities between December 2014 and February 2015 from SRC, a former subsidiary of state fund 1Malaysia Development Berhad (1MDB). The payments were received into his AmIslamic bank accounts in Kuala Lumpur in three transactions of RM27 million, RM5 million and RM10 million.

Each charge is punishable by up to 15 years in jail and a fine of not less than five times the proceeds of the illegal activity, or RM5 million, whichever is higher.

Yesterday marked Najib's second appearance in a Malaysian court since he was ousted in national elections in May.

On July 4, Najib, 65, was charged with three counts of criminal breach of trust and one count of abuse of power over funds totalling RM42 million belonging to SRC.

He pleaded not guilty to those charges and was released after posting RM1 million bail.

The fresh charges yesterday, which relate to the same funds from SRC, will be heard together with the July case. No additional bail was requested.

The trial dates to hear all seven charges will be set tomorrow.

The court will also hear tomorrow submissions on Najib's application for a permanent gag order to prevent public discussion of the merits of the case. His defence team had obtained an interim gag order on July 4, which runs until tomorrow.

The new Pakatan Harapan government has revived investigations into 1MDB after the United States Department of Justice claimed that as much as US$4.5 billion (S$6.1 billion) was misappropriated by high-level officials of the state fund and their associates. 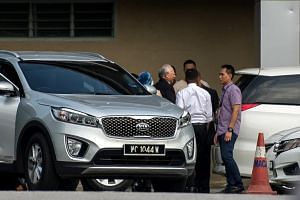 Najib was cleared by the Malaysian authorities in 2016, amid allegations that RM2.6 billion of 1MDB funds were found in his personal accounts. The former leader has denied any wrongdoing, and said the money was a donation from the Saudi royal family.

"SRC, at the time of the so-called happening, was no longer a part of 1MDB. So, it has got nothing to do with 1MDB," Najib's lead lawyer Muhammad Shafee Abdullah told reporters outside the High Court yesterday. SRC was moved to the Finance Ministry in 2012, when Najib was both finance minister and prime minister.

As Najib left the court building yesterday, a group of about 20 supporters outside the court chanted "Hidup Najib" (long live Najib) and "Allahu Akbar" (God is great). He did not speak to the media.

Earlier in court, Tan Sri Muhammad Shafee argued that there was no good reason to change the judge hearing Najib's case. He said that if the judge recused himself, it should have been done in open court.

On Aug 2, Justice Mohd Nazlan Mohd Ghazali replaced the original judge slated to hear the case, Justice Mohd Sofian Abd Razak. This switch took place after calls for Justice Sofian to recuse himself because his brother is a leader in Umno, the party formerly helmed by Najib, in the latter's home state of Pahang.

"You do not promote justice by doing this behind closed doors," Mr Muhammad Shafee told reporters outside the court. He added that no one had applied for the judge to be transferred out from the case.

"I am confident of a fair trial for my client, but my client thinks this is a political prosecution," he told reporters.