Eight weeks after his coalition lost general election, the former PM is set to face charges over 1MDB in court today

Datuk Seri Najib Razak has become the first former prime minister to be arrested in Malaysia, following years of being dogged by the 1MDB scandal.

Anti-graft officials turned up at his mansion yesterday afternoon to arrest him, just eight weeks after his Barisan Nasional coalition lost the May 9 general election.

The new administration of Prime Minister Mahathir Mohamad, soon after coming to power, had revived the 1MDB probe that Datuk Seri Najib halted in 2015.

The former leader is expected to have charges being read out in court this morning involving SRC International, a former unit of the troubled state fund 1Malaysia Development Berhad (1MDB).

The 65-year-old was arrested at his private residence in Jalan Langgak Duta, Kuala Lumpur, at 2.35pm, and taken straight to the Malaysian Anti-Corruption Commission (MACC) headquarters in Putrajaya in an unmarked vehicle.

News of his arrest, and that he will be charged in court today, was issued by the 1MDB Task Force formed by the new government.

Coincidentally, his stepson Riza Aziz and former deputy Ahmad Zahid Hamidi were recording statements at MACC when Mr Najib was taken stealthily into the same building.

The media was given the slip despite waiting as early as 10am outside the MACC headquarters, with several other Umno officials also being called in for questioning in a busy day for the graftbusters.

Najib to be charged tomorrow 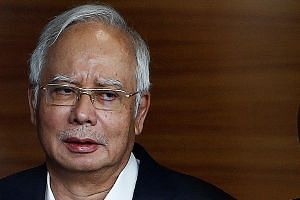 Najib arrested over 1MDB scandal, to be charged today 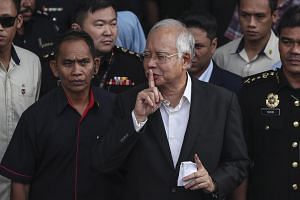 "We have been on standby in front of the entrance since morning but did not see Najib being brought in," a reporter said.

The Straits Times understands that the former prime minister is expected to face charges at the Kuala Lumpur court under the Penal Code and the MACC Act, with investigations also invoking anti-money laundering laws to recover up to US$1 billion (S$1.37 billion) alleged to have been siphoned from 1MDB into Mr Najib's personal accounts.

The US Department of Justice had alleged in civil suits that US$4.5 billion of 1MDB money was misappropriated.

Mr Najib could face up to 20 years in jail.

The investigation into the former PM and his wife has gripped Malaysia, especially after five police trucks were required to haul seized valuables from high-end residential units linked to the couple.

Police have estimated the haul of cash and luxury goods such as handbags, watches and tiaras, to be worth up to RM1.1 billion (S$371 million).

A former Najib aide was also arrested last week, and helped tie up several loose ends, including the location of an alleged Kuala Lumpur safehouse that was used by financier Low Taek Jho, who was alleged to be heavily involved in 1MDB's decision-making.

Mr Najib was forced by his party to resign as Umno's president three days after the May 9 electoral defeat, but yesterday, several called for solidarity with him.

A rally outside the MACC headquarters last night was led by Umno supreme council member Lokman Noor Adam. He said the demonstration was to "protest against the persecution of Najib" and "to show our disappointment with a cruel government".

Women's wing members across the nation were called by its chief Noraini Ahmad to hold mass prayers for Mr Najib.

But new Umno chief Mr Zahid took a different tack, saying he supported the probe according to "the rule of law", as the party's image has been tarnished in the court of public opinion. "I always support if there are investigations to be carried out and some evidence and witnesses have to appear, to clear the image and perception of Umno," he said after exiting the MACC premises where he had been giving his statement on separate allegations of graft against him.

Meanwhile, Malaysian Bar president George Varughese said the lawyers' group is troubled by the 1MDB Task Force's announcement of Mr Najib's arrest. "The task force has no legal standing to arrest Najib. Any arrest can be effected only either by the MACC or the police," he said in a statement.

"The task force is also not in a position to decide whether or not Najib will be charged and/or when he is to be charged," Mr Varughese said.

The arrest was made by the MACC.

Events leading to the arrest

Three months after taking over as prime minister, Mr Najib Razak launches the 1MDB sovereign fund to invest in energy, real estate and other industries.

1MDB, with debt burdens rising, misses a loan payment of about US$550 million (S$751 million).

Malaysia forms a special task force - including officials from the central bank, police, anti-graft agency and the Attorney-General's Chambers - to look into 1MDB.

The attorney-general clears Mr Najib of any wrongdoing, saying that US$681 million in his account was a donation from a member of the Saudi royal family, and that Mr Najib had returned US$620 million in a few months.

A Malaysian parliamentary inquiry team slams the 1MDB board for being irresponsible, and urges a probe into its former chief. The 1MDB board resigns.

The US Department of Justice (DOJ) files civil lawsuits seeking to seize assets bought with money allegedly stolen from 1MDB, saying that over US$3.5 billion was misappropriated from the fund. The lawsuits say US$681 million from a 2013 bond sale by 1MDB was transferred to the account of "Malaysian Official 1", whom US and Malaysian officials later identify as Mr Najib.

The DOJ says more than US$4.5 billion was siphoned from 1MDB by high-level fund officials and their associates.

DOJ says it is conducting a criminal probe into 1MDB.

The US attorney-general describes the 1MDB scandal as "kleptocracy at its worst".

Police say nearly US$275 million of assets was seized from properties linked to Mr Najib, including 12,000 pieces of jewellery, more than 500 handbags, over 400 watches and nearly US$30 million in cash. Bank accounts belonging to Mr Najib's political party Umno are frozen.

A version of this article appeared in the print edition of The Straits Times on July 04, 2018, with the headline 'Najib is first former premier in Malaysia to be arrested'. Subscribe
Topics:
More
Whatsapp Linkedin FB Messenger Telegram Reddit WeChat Pinterest Print Purchase Article Copy permalink