Lawyer N. Sivananthan, who represented Arul, did not object.

On Dec 12, Najib and Arul were charged separately at the Sessions Court with allegedly tampering with a final audit report on 1MDB.

According to the charge sheet, Najib used his position as prime minister to gain protection from any action, whether disciplinary, civil or criminal, in connection to 1MDB by ordering the final audit report to be altered before it was finalised and presented to the Public Accounts Committee (PAC).

He is said to have committed the offence at the Prime Minister's Office in Putrajaya between Feb 22 and Feb 26, 2016.

The charge under Section 23(1) of the Malaysian Anti-Corruption Commission (MACC) Act 2009 carries a maximum 20 years' imprisonment and a fine of no less than five times the amount of gratification or RM10,000 (S$3,290), whichever is higher. 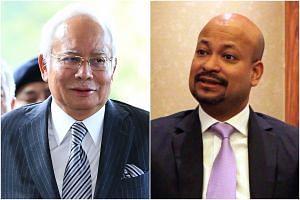 Arul was charged at a separate court with abetting Najib in tampering with the 1MDB audit.

The indictment is the first for Arul, the highest-ranking 1MDB officer to be charged in Malaysia's revived investigation into the fund.

Najib has pleaded not guilty to dozens of earlier money laundering and corruption charges linked to 1MDB, which is at the centre of a global scandal that allegedly saw US$4.5 billion (S$6.1 billion) misappropriated.