HANOI • North Korea's Foreign Minister kicked off an official visit to Vietnam yesterday as Pyongyang seeks to learn lessons from the communist state's post-war economic reform that has transformed the country into one of Asia's fastest growing economies.

A diplomatic source in Hanoi said that Mr Ri is also scheduled to visit a technology park near the city and meet experts from the Vietnam Academy of Agricultural Science.

Vietnam's economy has flourished as it has embraced market reforms, opened its doors to foreign investment and inked free trade deals, with GDP growth hitting 5 per cent or higher for the past decade.

It has done so while maintaining a single-party state with a tight grip on power and little tolerance for dissent - a model that experts say could appeal to Pyongyang.

North Korea may be using the current diplomatic thaw following a series of meetings with Seoul and Washington - including a landmark summit between its leader Kim Jong Un and US President Donald Trump in June in Singapore - to disarm its nuclear programme. 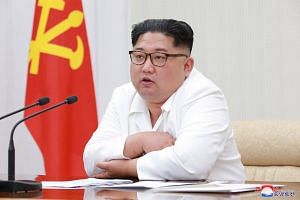 "North Korea is using this period of not testing (its nuclear weapons) to recover its external relations and appear as a respectable member of the international community," said Emeritus Professor Carl Thayer of the University of New South Wales in Canberra.

It is an approach encouraged by US Secretary of State Mike Pompeo who, on a trip to Vietnam in July, remarked on the "once-unimaginable prosperity and partnership" between former war foes Hanoi and Washington.

"Your country can replicate this path. It's yours if you'll seize the moment. The miracle could be yours; it can be your miracle in North Korea as well," he said in comments aimed at Mr Kim.

Mr Ri's visit could be a sign that North Korea is looking to move from its reliance on China - its largest trading partner.

"They want to expand their economic relations with other countries and not completely depend on China," said professor of international relations Kevin Gray at the University of Sussex.