YANGON • Myanmar's military will court-martial soldiers following a new finding in an inquiry into atrocities in Rakhine state, from which more than 730,000 Rohingya Muslims fled a 2017 army-led campaign that the United Nations says was executed with "genocidal intent".

Last Saturday, the website of commander-in-chief Min Aung Hlaing said a military court that visited the northern state found soldiers had shown "weakness in following instructions in some incidents" at a village believed to have been a Rohingya massacre site.

Last year, the Associated Press reported the existence of at least five graves of Rohingya victims in Gutarpyin village, in the township of Buthidaung.

But government officials at the time said 19 "terrorists" had died and their bodies were "carefully buried".

Military spokesman Tun Tun Nyi told Reuters that the investigation's findings were secret. "They will release another statement about it when the procedure is finished," he said.

The court that conducted the inquiry, comprising a major-general and two colonels, was formed in March to respond to accusations of mass killings, rape and arson by Myanmar's security forces. The accusations were made by the UN and rights groups Amnesty International and Human Rights Watch.

It visited Rakhine twice in July and August.

Myanmar forces had launched their offensive operations in Rakhine state in response to a series of attacks by Rohingya insurgents on security posts near the Bangladesh border. 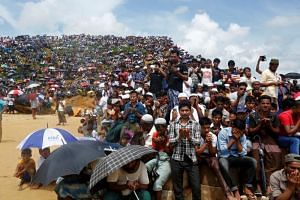 Asean should guarantee safe return of Rohingya to Myanmar

Last year, a UN fact-finding mission said the military campaign was orchestrated with "genocidal intent", and recommended charging General Min Aung Hlaing and five other generals with the "gravest crimes under international law".

Myanmar has denied the accusations, although Gen Min Aung Hlaing last month said a number of security men may have been involved.

A previous military investigation in 2017 exonerated the security forces of any crimes.

Myanmar is facing growing international calls for accountability over the Rakhine campaign.

The International Criminal Court has opened a preliminary examination into the violence, while a panel formed by Myanmar - that includes Philippine diplomat Rosario Manalo and Japan's former UN envoy Kenzo Oshima - is due to publish its findings.

A version of this article appeared in the print edition of The Straits Times on September 02, 2019, with the headline 'Myanmar to court-martial soldiers after inquiry into Rakhine atrocities'. Subscribe
Topics:
More
Whatsapp Linkedin FB Messenger Telegram Reddit WeChat Pinterest Print Copy permalink