The military has deployed thousands of troops to try to crush Arakan Army (AA) insurgents in the state, where the ethnic group is fighting for more autonomy for Rakhine Buddhists.

But the AA has inflicted a heavy toll through violent raids, kidnappings and improvised explosive devices.

On Saturday morning, rebels in concealed positions on a river bank shot at a ferry carrying off-duty police and soldiers north from the state capital, forcing it to dock, military spokesperson Zaw Min Tun said.

"More than 10 soldiers from the army, about 30 police and two staff from the prison department" were among the more than 40 passengers forced to disembark before being taken away, he said.

Authorities were using helicopters in their pursuit of the rebels, and had spotted a large contingent crossing a river, he added.

The Arakan Army could not immediately be reached for comment.

The flare-up comes less than two weeks after suspected rebels disguised as a sports team stormed a bus and abducted dozens of firefighters and civilians in Rakhine.

Tens of thousands have been displaced in the state due to the fighting. 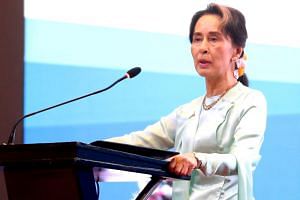 Rakhine is the same area where the military drove out more than 740,000 Rohingya Muslims in a 2017 campaign UN investigators have called genocide.

Rights groups have accused soldiers of committing war crimes including extrajudicial killings in its fresh campaign against the Arakan Army.

But monitors have also singled out the rebels for alleged abuses.

Both sides have rebuffed accusations as violence has continued in an area largely sealed off to independent media.