YANGON (Reuters) - Myanmar President Thein Sein has decided not to run in a parliamentary election scheduled for Nov 8, a senior official from his office said on Monday, meaning he will not be eligible for a second term as head of state.

"The president wrote a letter to U Shwe Mann, chairman of the ruling USDP Party, that he will not run in the next general election because of his health condition," the official told Reuters, asking not to be named.

The former military commander was elected to parliament in 2010. 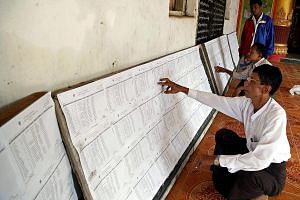 Expectations 'need to be managed' for Myanmar election

From there, an electoral college nominated him as one of the three vice presidents and, subsequently, president.

Suu Kyi said on Saturday her National League for Democracy party would participate in the election, ending months of uncertainty. The vote is being billed as Myanmar's first legitimate election in 25 years.