Htin Kyaw, a respected writer and longtime close friend of Suu Kyi, received 360 votes of the 652 cast, the parliamentary official counting the votes said on Tuesday. Suu Kyi was the first to cast her vote.

MPs, the majority of them from Suu Kyi's National League for Democracy (NLD), burst into applause when the results were announced after a lengthy counting procedure in the capital Naypyidaw.

Though he is not a lawmaker, Htin Kyaw’s ties with the party and Suu Kyi run deep. The 69-year-old attended the same secondary school as Suu Kyi and went on to study at the Yangon Institute of Economics and at the University of London. He currently serves as a director at the Daw Khin Kyi Foundation, a charitable organisation named after Suu Kyi’s mother. 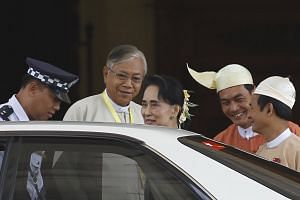 He is the son of renowned Myanmar writer Min Thu Wun, who was an early member of the NLD. He is married to Suu Suu Lwin, an NLD lawmaker who is the daughter of U Lwin, a former finance minister who helped form the NLD.

Myanmar is in the grip of a stunning transformation from an isolated and repressed pariah state to a rapidly opening aspiring democracy.

Both legislative houses are now dominated by the Suu Kyi's NLD thanks to its election landslide in November. But the military remains a powerful force in the Southeast Asian nation and has refused to change a clause in the junta-era constitution that bars Suu Kyi from top political office because she married and had children with a foreigner.

NLD itself has been vague about its plans once the handover from President Thein Sein’s government is completed on April 1.

While its election manifesto covered everything from the economy to education to ethnic relations, the document included few concrete details.

The 70-year-old Nobel laureate has unrivalled popularity both as the daughter of the country's independence hero and as a central figure in the decades-long democracy struggle. Her party's huge election victory was seen as a further endorsement of her political star power, as millions were swept to polling stations by the NLD's simple message of change.

Months of negotiations with army chief Min Aung Hlaing have failed to remove the obstacles blocking her from power, but she has vowed to rule "above" the next leader.

Her choice of Htin Kyaw to act in her place is seen as a testament to her absolute faith in his loyalty.

"We have planned to vote for Htin Kyaw and practised not to make any mistake," said an NLD MP who asked not to be named after attending an instruction session by the party on Monday afternoon.

Htin Kyaw will replace incumbent Thein Sein at the end of the month following five years of army-backed quasi-civilian leadership that has been lauded for steering the nation out from the shadow of outright military rule.

Tuesday's vote saw 652 legislators choose from three candidates, one put forward by each of the two legislative chambers and a third proposed by the military, who are reserved a quarter of seats in parliament.

It is not yet clear what role Suu Kyi plans to take or how she will manage the relationship with the country's new president.

A new Cabinet, set to be announced at the end of the month, is expected to include figures from across the political spectrum as she looks to promote national reconciliation.

It will swiftly set about facing the country's many challenges, including poverty, civil wars in ethnic minority borderlands and decrepit infrastructure.

Senior party figures say one of the government's first tasks will be to whittle down myriad ministries by combining overlapping portfolios.