SINGAPORE (AFP) - Hundreds of Myanmar nationals queued to cast their ballots in Singapore on Thursday (Oct 15) in advance voting for landmark November elections in the former junta-ruled country, but only a fraction of the millions-strong diaspora has registered to vote.

For decades Myanmar nationals have escaped poverty and repression at home by fleeing to neighbouring countries in search of work, propping up industries spanning construction to fisheries in South-east Asia and beyond.

Wealthier families have also long sent their children for studies abroad to countries including Singapore, where some have later stayed on for employment. 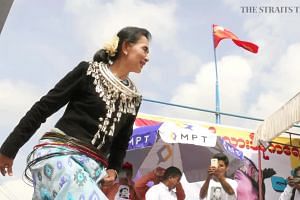 But only around 30,000 overseas workers in 37 nations have registered for advance voting in the November 8 polls, according to Thein Oo, director of the Union Election Commission (UEC) in Myanmar's capital Naypyidaw.

On Thursday (Oct 15), polls opened at the country's embassy in Singapore with some 400 Myanmar nationals queuing patiently in the baking midday sun for their chance to vote, said an Agence France-Presse journalist at the scene.

They can cast their ballots in the city-state - where many are employed in law firms and the IT sector, while smaller numbers work as domestic helpers - until Sunday (Oct 18).

Advance voting will take place in Thailand - home to an estimated two million Myanmar migrants who prop up vital sectors including seafood and agriculture - on Saturday (Oct 17), but only 561 people have registered to vote, according to the UEC.

Mr Thein Oo told Agence France-Presse the date for advance voting is set by individual embassies, adding that votes that fail to reach the UEC by 4pm on polling day "will be void".

For many Myanmar nationals, this general election is the first time they can have a say over who governs their nation after decades locked in the military's fearsome grip.

Aung San Suu Kyi's National League for Democracy is tipped to sweep the upcoming polls as it contests its first nationwide election in 25 years.

The party had won the 1990 vote, whose results were ignored by the then junta, and boycotted flawed polls in 2010 which returned the military-backed party to power.