YANGON • Myanmar's military yesterday said it had set up a court to investigate its conduct during a crackdown on the Rohingya Muslim minority in 2017 that forced more than 730,000 to flee across the border to Bangladesh.

The court, comprising a major-general and two colonels, will probe events in western Rakhine state in August 2017, the military said in a statement posted on the website of Senior General Min Aung Hlaing, the commander-in-chief.

"The information is released that the investigation court was formed with the following persons to further scrutinise and confirm the respective incidents," the military said. The court will respond to allegations made by the United Nations and rights groups Amnesty International and Human Rights Watch accusing security forces of mass killings, rape and arson.

Myanmar forces launched their offensive in Rakhine state in response to a series of attacks by Rohingya insurgents on security posts near the border with Bangladesh.

A UN fact-finding mission last year said the military campaign was orchestrated with "genocidal intent", and recommended charging Gen Min Aung Hlaing and five other generals with the "gravest crimes under international law".

Myanmar has denied the accusations of murder, rape and other abuses by its forces, though Gen Min Aung Hlaing said last month that "a number of security men may have been involved".

A previous military investigation in 2017 exonerated the security forces of any crimes.

The military stands accused of the gravest crimes under international law and has shown no sign of reform... The idea that the Tatmadaw could investigate itself and ensure justice and accountability is both dangerous and delusional. 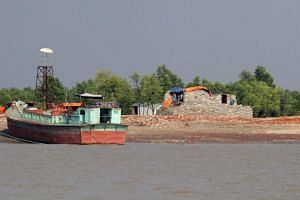 The new court is "another bad faith manoeuvre" to fend off international pressure, said Mr Nicholas Bequelin, Amnesty International's director for South-east Asia and the Pacific.

"The military stands accused of the gravest crimes under international law and has shown no sign of reform," he said. "The idea that the Tatmadaw could investigate itself and ensure justice and accountability is both dangerous and delusional," he added, referring to the army.

The military information unit did not immediately respond to a Reuters request for comment.

Myanmar is facing growing international calls for accountability over the Rakhine campaign. The International Criminal Court has opened a preliminary examination into the violence, while a commission of inquiry formed by Myanmar and including Filipino diplomat Rosario Manalo and Mr Kenzo Oshima, Japan's former ambassador to the UN, is due to publish its findings this year.

The creation of the military court was based on assessments and suggestions from the military-appointed Judge Advocate-General, as well as the allegations contained in human rights reports, according to the army statement.