COX'S BAZAR • Rakhine authorities have refuted a report of five mass graves of Rohingya in a village in the crisis-hit Myanmar state and said that "terrorists" had attacked security forces there.

The bodies of 19 "terrorists" were found after the fighting and buried, government mouthpiece Global New Light of Myanmar said on Friday. In an article published last week, the Associated Press reported on at least five mass graves that contained the bodies of people massacred in Gu Dar Pyin village on Aug 27. Survivors said armed soldiers arrived with shovels to dig holes, as well as acid to melt the body parts.

Myanmar troops are accused of waging an ethnic cleansing campaign against the Rohingya Muslims. The United Nations special rapporteur on human rights in Myanmar, Dr Yanghee Lee, said the military operations last year bore "the hallmarks of a genocide".

Despite widespread reports of atrocities during the "clearance operations", the military has admitted to only one incident - in Inn Din village where soldiers conducted an extrajudicial killing of 10 Rohingya.

The violence in Rakhine has hardened nationalist sentiments against the Rohingya, who are not recognised as one of Myanmar's ethnic groups. Nearly 700,000 people have fled to Bangladesh since last August. The repatriation of these refugees was supposed to start on Jan 23, but was postponed by Bangladesh, which said then that preparations in Myanmar were not completed.

Bangladesh's refugee relief and repatriation commissioner Abul Kalam told reporters on Wednesday that before repatriation can start, there must be preparations within Myanmar that would allow returnees to be reintegrated.

"Safety is a big issue. It's not only about taking them back to their respective villages, for example... these people have to be reintegrated into their society," he said. 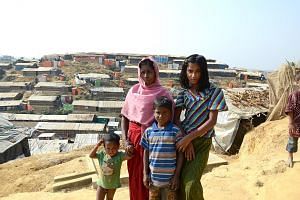 Bangladesh would also need time to draw up a list of families who volunteered to return, and get the list approved by the Myanmar government. Mr Kalam would not say when the actual repatriation would begin, but denied it could take several years.