YANGON • Myanmar voters cast their ballots in a small but key by-election yesterday, a rare local test of support for embattled leader Aung San Suu Kyi's party more than halfway through her time in office.

Ms Suu Kyi and the National League for Democracy (NLD) swept to power in 2015 in a landslide victory, ending decades of military rule.

But her tenure has been marred by a failure to speak up for Rohingya Muslims driven out of the country by the army and stumbling peace talks with insurgent groups in lawless border areas.

A mere 13 positions are in play in the country's second by-election since national polls three years ago, but they are spread out across the country and include parliamentary and regional assembly seats.

Some two dozen parties are in the mix and 69 candidates are taking part.

At one polling station in Yangon's Tamwe township, residents showed support for Ms Suu Kyi while acknowledging some of the criticism. 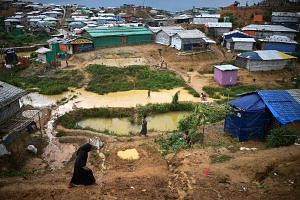 "I was a strong supporter of the NLD for years, but during the years when NLD took power, there were some failures that they are working on," he added, without going into detail.

Ms Aye Soe, a 52-year-old street vendor, expressed full-throated backing. "I will support her until I die," she said.

Initial results are expected to be announced today.

Nobel laureate Suu Kyi's reputation at home is more secure than it is abroad, where her image as a rights icon has been shattered by the Rohingya crisis.

More than 720,000 from the stateless Muslim minority have crossed into Bangladesh from western Myanmar since a military crackdown last year.

The refugees have recounted stories of murder, rape and villages burned to the ground.

Myanmar has denied almost all of the allegations, saying soldiers were defending themselves against Rohingya militants.

United Nations investigators have called for the situation to be referred to the International Criminal Court and for senior members of the Tatmadaw, as the armed forces are known, to be investigated on genocide charges.

Myanmar Foreign Secretary Myint Thu visited the Rohingya camps in Cox's Bazar last Wednesday to discuss the repatriation of refugees, which Myanmar and Bangladesh said would begin this month. Most refugees, however, repeated demands that they be given Myanmar nationality with full rights before they return.