Malaysia's main opposition parties Umno and Parti Islam SeMalaysia (PAS) yesterday held up Muslim unity as the answer to threats facing the country's majority Malay community, ahead of a political pact they will sign in Kuala Lumpur today.

The "Himpunan Penyatuan Ummah" (HPU) or "Unity Gathering of the Muslim Faithful" organised by the two parties kicked off in Kuala Lumpur with a series of town halls and rallies that claimed the Malays and their religion were being sidelined by the policies of the Pakatan Harapan (PH) government.

Standing before an audience of over a thousand supporters largely in white Islamic garb, PAS deputy president Tuan Ibrahim Tuan Man interpreted the words of Prophet Muhammad to assert that the majority in any area must lead.

"In our country, the majority is Malay Muslims. So we must lead to ensure stability," he said. "We cannot accept the methods of DAP that threatens Islam in our country. DAP cannot be trusted in politics, let alone entrusted with government," he told last night's rally at the Umno headquarters.

He was referring to the Chinese-dominated Democratic Action Party, one of four parties in the Mahathir Mohamad-led PH government that came into power in May last year after ousting the Umno-led Barisan Nasional coalition.

The sentiment was echoed by Malay rights activist Aminuddin Yahya, who leads the Defenders of the Faithful NGO: "The government no longer belongs to Malays. Malay government leaders have no agenda but the Chinese party DAP has a systematic agenda."

PH's victory was partly due to the Malay vote being split three ways among itself, Umno and PAS. Umno and PAS - the country's largest Malay-Muslim parties - have since teamed up, after finding the arithmetic of straight fights against PH compelling.

Not only have the two parties won all three by-elections this year in seats where Malays form the largest community, electoral data showed that their combined vote hauls would have won them an additional 21 parliamentary wards that had instead elected PH candidates at the national polls last year - enough to have stopped Tun Dr Mahathir's shock return to power.

As a result, they have agreed to set aside their four-decade-old enmity, and will ink their political cooperation charter today. 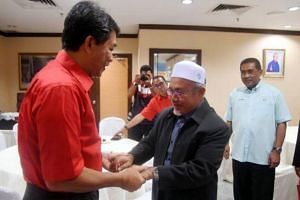 Umno and PAS to stage mammoth rally in KL on Friday

Umno-PAS alliance and what it could mean for Pakatan Harapan: Sin Chew Daily

"The two biggest Malay-Muslim parties realise we cannot continue to be at odds. The victims are our children, our race and religion," said Umno deputy president Mohamed Hasan when closing last night's rally.

Meanwhile, approval ratings for PH have sunk from 75 per cent when they formed the government to 41 per cent as of July. Among the Malays, who form the majority in more than half of Parliament's 222 wards, less than a third of those polled said they were happy with PH. Malays also cite inflation and jobs as their biggest concerns, amid slower economic growth.

But even as Malaysia's Cabinet huddles in Putrajaya today for a special meeting to approve an ambitious wealth redistribution plan to address the community's grouses, a "Buy Muslim First" campaign has been gathering steam.

Some 1.7 million members have joined a Facebook group supporting the movement. Several speakers at HPU yesterday pointed to the campaign as an example of Muslim unity, with Mr Aminuddin predicting that it will result in "hundreds of new millionaires" from the community within a year.

The two Malay-Muslim parties have focused on batting away allegations of racism by insisting that as founding parties of Malaysia, they are merely "custodians of the federal Constitution".

While the two parties may control over two-thirds of the Malay vote, it would be nearly impossible for them to win a parliamentary majority without MPs from wards with largely non-Muslim voters. Umno has in the past relied on partners in Sabah and Sarawak, where conservative Islam has been shunned, to form a government.

Umno deputy Johor chief Nur Jazlan Mohamed told The Straits Times: "This is just an election strategy because we know which votes we can get. Non-Malays don't have to worry because post-election, we will need other parties to form a government, so our policies will have to be balanced."