MUSE, MYANMAR (AFP) - With tinted windows and their militia name emblazoned on the side of their Ford truck, "Pan Say" fighters cruise the sleazy streets of Muse, Myanmar's main gateway to China and awash with weapons and cash from casinos, drugs and sex.

Ten armed groups run the Shan State border town of Muse, which is separated by a shallow river from the gleaming towers of its Chinese counterpart, Ruili.

All are under the tutelage of the same patron: Myanmar's army.

China and Myanmar have an agreement not to station troops along their border.

Instead, Myanmar's army uses the militias as proxies in a long-running conflict between the central state and ethnic rebel groups who operate in the area, including the Kachin Independence Army (KIA) and Taaung National Liberation Army (TNLA).

A fiendishly complicated, decades-old struggle for money, trade, resources and ethnic identity is playing out in Muse.

The Pan Say militia gave AFP a rare snapshot of the shifting alliances and rivalries which have defined Myanmar's frontier areas since its independence in 1948.

Each militia "looks after its own business ... and we look after ours", a senior Pan Say member told AFP as a batch of 30 fresh recruits dressed in fatigues trained in a compound.

They have joined one of Muse's largest militias, which boasts several hundred men, armed with M-16 rifles and Kalashnikovs.

Pan Say insists it is funded by its own jade mines, cigarette factories and karaoke bars, denying knowledge of narcotics or other illegal activities that prosper along the border.

Like other Muse militias, Pan Say accepted a deal in 2009 to come under the military's control in exchange for a degree of autonomy.

As a result, an uneasy truce exists between the militias, who have agreed not to engage in combat unless ordered by the military.

The fighters cast themselves as unconventional but necessary keepers of the peace, accusing the rebel groups they fight against of extortion and racketeering.

Experts are less generous in their definition.

The "wasps' nest of militias" are as much behind the town's illicit economy as the rebels, says independent analyst David Mathieson.

"They drive around toting machine guns, running casinos, peddling yaba (low-grade methamphetamine), all as sub-contractors of local security for the Myanmar military."

Either way, the money keeps flowing.

Legal trade through the town - rice, fish and electrical goods - totalled US$1 billion (S$1.35 billion) between October and December, half of the entire country's land border trade, according to official figures. 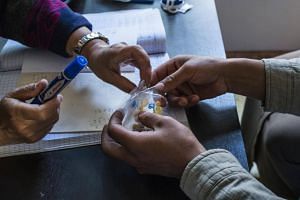 Myanmar's Shan state runs on meth - and exports are thriving

With China on its mind, India deepens engagement with Myanmar

But the riches made from the vast quantities of meth, opium, illegal animal parts and jade - as well as women being sold into marriage in China - are likely to dwarf those figures.

Myanmar is now one of the world's largest sources of meth, with precursor chemicals from China feeding labs peppering the restive eastern borderlands, according to the UN's drug and crime agency.

Lorries rumble in both directions along a dirt road to illegal crossing points just outside Muse, under the watchful eye of militiamen of various stripes.

Inside the town, barbed wire-clad walls and stern, gun-wielding guards protect a plethora of casinos, which are suspected of laundering money from both sides of the border.

Hotel rooms offer piles of condoms, while drug dealers buzz around the low-budget brothels, which give the town its reputation for sleaze, serving a transient population of border merchants and long-distance drivers.

And prospects are looking even better for Muse's nefarious trades.

Routes between Muse and Myanmar's west coast are set to improve as investment pours in under China's so-called "Belt and Road" strategy of boosting the infrastructure of key trade partners.

Better transport routes could well give a boost to the town's "illicit profiteering" - at least in the short-term - a recent report by International Crisis Group (ICG) predicts.

While money flows through Muse, little trickles down to its people.

Instead they run a daily gauntlet between the militias, rebels, drug addicts and petty criminals.

"We're scared to go out at night," says builder and father of two Kyaw Zin Latt, 23, who recently moved from the country's south for work.

An NGO provides one of the town's few life-line public services - a fleet of ambulances.

They retrieved casualties from an attack on a bridge near the border last May, in which 19 people were killed, including 15 civilians.

The offensive by ethnic rebel group the TNLA descended into an eight-hour stand-off with the Pan Say militia.

"A police officer was shot dead beside this building," says the NGO founder Thaung Tun, as he drives cautiously over the bridge.

It is now defended by the army, two different militia groups and the police.

But outnumbered and outgunned, the cops languish far down Muse's pyramid of power.

"There are places that are too dangerous for us to go by ourselves," one police officer laments.