PAILIN, CAMBODIA (AFP) - Former Khmer Rouge cadres and relatives paid their final respects to "Brother Number Two" Nuon Chea on Friday (Aug 9), ahead of a cremation ceremony in Cambodia for the man considered the chief ideologue of the murderous regime.

Nuon Chea, once the most trusted deputy of leader Pol Pot, died last Sunday in a Phnom Penh hospital at age 93.

His death comes less than a year after he was sentenced to life in prison by a UN-backed tribunal for genocide against ethnic minority groups, for which he remained unrepentant up until the end of his life.

Hundreds of family members, former comrades and friends lit incense and prayed next to his coffin at a temple in western Pailin province, where he will be cremated late Friday.

The area was the last holdout of the Khmer Rouge after the regime collapsed.

Former Khmer Rouge naval chief Meas Muth, who has also been accused of genocide and crimes against humanity in a stalled criminal case, said he had come to "bid a final farewell" to his former superior.

Mourners knelt on rattan rugs next to a portrait of an elderly Nuon Chea wearing his trademark oversized sunglasses.

Later as the hours-long funeral began, mourners looked on as his body was transferred to the crematorium in an open casket. 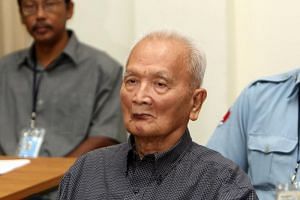 But even in death, his chequered legacy and his frequent attempts to downplay his crimes could not be ignored.

"The allegations against him are so unjust. No leaders would kill their own people, otherwise they don't have people to lead," his daughter Ly Bunthoeun told AFP.

"He did not commit such (killings). He already explained at court," she added, speaking at the Buddhist temple her father helped to build in the former Khmer Rouge stronghold near the Thai border.

The reign of terror led by "Brother Number One" Pol Pot left some two million Cambodians dead from overwork, starvation and mass executions from 1975 to 1979.

Nuon Chea was not arrested until 2007. He was convicted alongside former titular head of state Khieu Samphan, who is appealing his sentence.

They are among just a handful of former Khmer Rouge leaders to face justice in a country where deep divisions remain over the legacy of the murderous regime.

"Many other senior Khmer Rouge leaders were spared their day in court," Human Rights Watch said this week, calling on Prime Minister Hun Sen to push for more prosecutions.

But Hun Sen - himself a former Khmer Rouge cadre - has come out against any further cases, claiming it would plunge the country into instability.

Pol Pot, who wanted to transform Buddhist-majority Cambodia into an agrarian Marxist utopia, died in 1998 without facing trial.

Many Cambodians talk of the need to move on from the painful, knotted chapter of the country's recent history, with survivors and perpetrators of violence still often sharing communities.

"During that regime, everyone was a victim," 60-year-old nun Pang Cheng Ly told AFP after paying her respects, adding that she lost more than 10 relatives during the Khmer Rouge era.

"But I have learned the Buddhist Dharma, so we don't take revenge... I forgive him (Nuon Chea) so that he - and we - won't have sins anymore."

Nuon Chea's wife Ly Kim Seng said he died with a message of peace for his family. "He advised children to love each other, not to argue," she said.