JOHOR BARU • More waste dumping sites have been discovered near the river polluted by the recent toxic chemical spill in Pasir Gudang, Johor, even as the Malaysian authorities completed their cleanup of the affected area.

Signs of other waste dumping sites were found within a 5km area by The Star, including in Kampung Pasir, where solid waste, mainly from construction, was being dumped about 50m from Sungai Kim Kim.

Meanwhile five blue barrels, believed to contain chemicals, were discovered yesterday just 2km from the river. Residents claimed that liquid from the barrels had already flowed into the river, causing a stench.

More than 3,000 people have been treated for exposure to hazardous fumes after industrial waste was dumped into the river two weeks ago, and 111 schools in the area have been forced to close from last Wednesday.

So far, more than a dozen other dump sites have been discovered.

Some houses along the river have been turned into possible "landing points" for illegal chemical dumping, which is mainly done at night. These house owners are paid for each lorry load, and on some days, there are a few lorries going into the area to dump chemicals or construction waste.

A resident known as Mat said this has been going on for a long time.

"They are very fast. They put the hoses into the river and leave as soon as possible," he said, adding that many of the residents were ignorant and did not know that the chemicals were harmful.

"Now, because of their action, this disaster has happened... I hope the authorities will take stern action," he said.

He added that the authorities needed to find a long-term solution to stop the residents from working with syndicates that bring in chemicals from the nearby industrial estate. 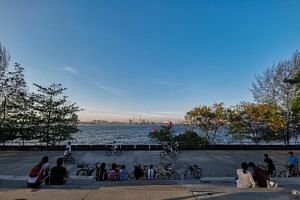 Kampung Pasir Putih chief Suhaimi Ahmad Shah confirmed that a few locations in Pasir Putih have been turned into illegal landfills by contractors hired by the local authorities.

When shown photographs of these sites, Johor Department of Environment (DOE) director Mohammad Ezanni Mat Salleh said his department would investigate the matter and would order immediate action to be taken.

"It is just sad that they have made this into a living, and the authorities need to educate them that this is wrong and harmful to them and their families," he said.

Mr Chow also urged the DOE to speed up its checks on all chemical factories in the area, as those carrying out illegal dumping would now look for other rivers to dispose of their waste in.

"Please do not wait until this Pasir Gudang disaster is over... The government should also rope in other agencies ... and local councils to immediately start checking waterways, jungles and open spaces and keep an eye on these chemical factories," he added.

Energy, Technology, Science, Climate Change and Environment Minister Yeo Bee Yin announced earlier that as a long-term measure, the DOE will be carrying out checks on 252 chemical factories in the area after the crisis is over.

National police chief Mohamad Fuzi Harun declined to provide more details of the arrests, saying that "this could jeopardise our investigation".

The 111 schools in Pasir Gudang that were ordered to close last Wednesday due to the toxic fumes will remain shut until the school holidays, which begin on Friday and run until March 30.

Education Minister Maszlee Malik said the decision was made following a briefing with the authorities and agencies involved in the cleanup operations.

"The ministry is following the advice by these agencies… so all schools in the district here will continue to be closed until the school holidays," he said after visiting the medical base at the Pasir Gudang Indoor Stadium yesterday.

The Singapore authorities said yesterday that the Republic's air and water quality, and water supply, continue to remain unaffected by the chemical spill incident.