Around 10 per cent of Malaysia's 30 million people belong to families who own smallholdings dedicated to harvesting palm oil, and they account for the majority of voters in nearly a quarter of the national assembly's 222 seats.

Girding for a general election due by August, Najib was given a taste of the discontent rife in the countryside when hundreds of farmers flocked to Kuala Lumpur last month to protest a pending EU move to phase out the use of palm oil in biofuel.

"I will not support the government if they don't resolve this issue," said Abdul Rahman, a farmer who runs a smallholding in Negeri Sembilan, a state an hour's drive south of the capital.

"The failure and inexperience of the government led to the EU's boycott of our palm oil," hen told Reuters.

Najib can ill-afford to lose votes from Malays in rural areas that have hitherto been a rock-solid votebank for the United Malays National Organisation (Umno), the party that has led every multi-ethnic coalition since Malaysia emerged from British colonial rule in 1957.

Aged 92, and having stood down in 2003 as Malaysia's longest serving premier, Mahathir Mohamad has come out of retirement to lead the campaign against his one-time protege Najib, having forged an unlikely alliance with jailed opposition leader Anwar Ibrahim. 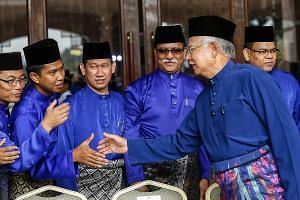 Malaysia elections: Najib hints polls likely to be before July

Malays' loyalty to Umno has been tested by the steady flow of stories over the past three years about 1Malaysia Development Bhd (1MDB), a state investment firm whose funds, critics say, were used by Najib to boost his campaign for the 2013 election, which he narrowly won while losing the popular vote to an opposition bloc led by Anwar.

Najib, who chaired 1MDB's advisory board until it was dissolved in 2016, has consistently denied any wrongdoing over the billions of dollars lost by the fund, but an ongoing kleptocracy investigation into 1MDB in the United States - the biggest mounted by Department of Justice - has kept on the frontburner.

To cement authority and protect himself, analysts say Najib needs to lead UMNO to a convincing victory.

The 1MDB controversy has damaged Najib's standing more among urban Malays, but over the past year rural Malays have found their own reasons to be upset.

Malaysia's 650,000 smallholders, who cultivate 40 per cent of acreage dedicated to palm, fear they will bear the brunt of the EU ban, which William Simadiputra, an analyst at DBS Vickers, reckons could cost Malaysia about US$500 million (S$656 million) annually in export revenue.

Malaysia's plantations minister Mah Siew Keong told Reuters the government is working on expanding export markets to other non-traditonal palm buyers like Iran, Vietnam and Japan in a bid to shore up demand.

But the government's threat of retaliatory trade measures against the EU has been scorned by critics, who say it will lead to further loss of palm oil business to competitors.

"By saying you will ban EU imports you are just pushing away the palm oil business to Indonesia," said Wong Chen, a lawmaker with the opposition Parti Keadilan Rakyat (PKR) party.

Malaysia hasn't given up trying to persuade the EU to think again, raising its objections with a visiting French defence minister last month. France is hoping to sell Malaysia fighter jets worth about US$2 billion.

And when allegations of corruption surfaced last year at the Federal Land Development Authority (Felda), a state plantation agency founded to alleviate rural poverty, the government came under fire in the small towns and villages that make up the Malay heartland.

Many of Felda's 112,000 settlers took loans to invest in Felda Global Ventures, a listed unit of Felda that raised US$3 billion when it was launched in 2012 and has since seen its share price plunge by 60 per cent.

FGV's chairman was forced to quit last year, and its chief executive was suspended for four months during a government probe into suspicious transactions at a subsidiary. He later resumed his role.

"The game is to constantly keep the palm planters happy,"said PKR's Wong Chen.

But they are far from happy. The controversies at FGV have barely abated. Critics say it overpaid buying assets, notably the US$505 million purchase of a 37 per cent stake in an Indonesian palm oil firm.

Questions have also been raised last month over a Felda land deal in Kuala Lumpur, which allegedly points to criminal fraud.

Felda did not reply to a request for comment.

But, on this most recent land deal scandal, Najib said in a blog post that the government would "ensure the interests of Felda and the settlers are not compromised".

However, this core constituency's patience with the government may have run out.

"These issues have raised anger among the settlers," said Mazlan Aliman, president of the National Felda Settlers'Children Society (ANAK). "They see the government is not serious in addressing these issues, but instead try to cover up." "The damage that has been done is too big. It will influence the mood of voters in the upcoming elections, especially in Felda areas," said Mazlan.