In an interview with Channel NewsAsia (CNA), the Council of Eminent Persons chairman claimed that there were "moles within the civil service and enforcement agencies" who were feeding information to the previous administration.

According to the CNA report, which was published on Monday, Mr Daim received a tip-off just before Hari Raya that Low was at a hotel overseas with his family. However, Low disappeared from the hotel within an hour, he said.

He said Low had also requested immunity from the Malaysian government in exchange for cooperation with the authorities in finding assets connected to 1Malaysia Development Berhad (1MDB).

"I told him 'no'. If he wants to help, it is better for him to come back here first so that we can discuss the matter. He claims that he is innocent. If you are innocent, you should come back here. Why are you running away?" Mr Daim was quoted as saying.

"He said he could help us get back the assets and give us one or two names (of people involved). I said (to ask) them to come see me," Mr Daim said. 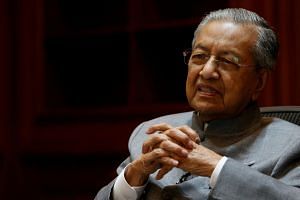 He added that Low attempted to contact him several times on Sept 6 to help resolve issues relating to the 1MDB scandal.

The CNA report said Mr Daim believed Low "did not act alone" in the plunder of millions from 1MDB.

"He has good advisers. He paid them," Mr Daim said, adding that the bankers who were working with Low were "paid handsomely to execute and cover" the fugitive's tracks.

Meanwhile, Finance Minister Lim Guan Eng said yesterday that the government will honour an interest payment on a 1MDB loan due by the end of this month.