Across the country, voters brave traffic, haze and even illness to make their voice heard

From poor farmers in the northern province of Chiang Mai to glamorous celebrities in Bangkok to a blushing bride in the southern province of Satun, millions of voters streamed into voting booths across Thailand yesterday to elect their future leaders.

They have waited eight years for the election, which pits the military-backed government against veteran opposition parties.

Across the country, temples, schools and government offices were turned into polling stations, numbering 93,200 in 77 provinces, including Bangkok.

Around 51 million Thais were eligible to vote, casting a single ballot for their preferred constituency candidates.

The same ballot would also be used to determine a separate list of allocated seats to each party.

The Election Commission estimated a voter turnout of about 80 per cent, about an hour before the polls closed.

Polling stations, which were open from 8am, closed at 5pm local time (6pm Singapore time).

Many voters were excited, saying that they had been closely monitoring news of the country's political developments on television and social media. Some had even dressed up for the occasion.

Rice farmer Nonglak Boonbamlue, from the north-eastern province of Ubon Ratchathani, had ditched her wide-brimmed straw hat for a more formal long-sleeved shirt and slacks - and a swipe of brightly coloured lipstick. She then zipped to the village polling station on her motorcycle.

"Normally, I do not put lipstick but today, I wear red-orange colour lipstick," the 44-year-old told The Straits Times. "Actually I feel a little sick and dizzy, but I am so afraid to lose my opportunity to vote. So, after voting, I rode my motorcycle to the doctor."

"It felt good to have voted but now, I worry that the party I like will lose," she added. 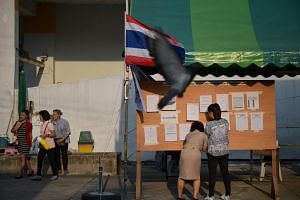 Voters in Thailand head to polls in long-awaited election 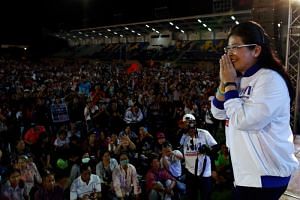 In the country's north and northeastern regions, the stronghold of the main opposition Pheu Thai party linked to former prime minister Thaksin Shinawatra, voters trooped out of their homes in face masks to shield themselves from the haze unleashed by open burning as farmers prepare for the next planting season.

Wearing a face mask, book editor Pote Kritkraiwan, 49, braved the hazy air in Chiang Mai to cast his ballot because he wanted to make his voice heard.

"I dashed to the polling station and returned quickly because it is not good to stay out in the open for too long," he said.

"I want to change things for the better and treasure my right to vote. This election is very important because it is like releasing all my frustrations with all the wrong things happening in the country now. I hope the election will bring about reforms and equality."

In the southern province of Satun, Muslim bride Wissanee Changlek had posted a photograph of her-self on Facebook in a flowing white dress and matching veil casting her ballot, snaring nearly 10,000 likes, 8,300 shares and more than 900 comments.

"I want a husband, and I also want to vote," she wrote.

Ms Sahariah Tehae, a teacher in the Muslim-majority Yala province in the south, said 20 people were already in the queue at the mosque when voting opened at 8am.

"Two old people had difficulty walking, but everyone helped them along as they walked to the voting booths," she said.

While many voters took buses, cars and motorcycles, former local administrator Surapol Polchim opted for an unusual mode of transport by riding his horse named Sam to a polling station in Nakhon Ratchasima's Phimai district.

He told local media that he used to ride the horse to patrol his neighbourhood.

In Bangkok, voters and candidates had also risen early yesterday to cast their votes.

Wearing a striped shirt and sunglasses, Prime Minister Prayut Chan-o-cha - and also the sole prime ministerial candidate nominated by the pro-government Palang Pracharath Party - voted at Phya Thai district, and told reporters he would be monitoring the election results from his home.

Eighty political parties are vying for the 500 seats in the House of Representatives, which comprises 350 elected from constituencies and another 150 from a party-list system.

At a car service centre which was turned into a polling station in Bangkok's Huay Kwang district, voters began trickling in 30 minutes before polling started.

Household goods shop owner Prapai Kunwitpaisarn, 63, the first to arrive, said she will be voting for a government that will improve the economy and maintain peace and order.

Another voter, flower seller Lamduan Boonsri, 62, said she had never missed an election.

Having to get around in a wheelchair after her leg was crushed in a car accident was not a good excuse to skip voting, she said.

With fire in her eyes and ice in her words, she added: "I have to choose the person I like. The one who has made achievements and is a good person."