YANGON (AFP) - Both Myanmar's military and its civilian government are behind the decision for Nobel Laureate Aung San Suu Kyi to defend her country against allegations of genocide at the UN's top court, an army spokesman said on Thursday (Nov 21).

In a shock move, State Counsellor Suu Kyi's office announced on Wednesday that the one-time democracy icon would travel to the International Court of Justice (ICJ) in The Hague to lead the defence team.

West African nation Gambia is due to open its case at the ICJ in December on behalf of the 57 member states of the Organisation of Islamic Cooperation.

The mainly Muslim nation accuses Myanmar of breaching the 1948 Genocide Convention through its bloody military crackdown in 2017 against its Rohingya Muslim community in Rakhine state.

"We're cooperating in this case and our legal experts are working together," military spokesman Zaw Min Tun told AFP on Thursday, referring to the armed forces and civilian government.

He also confirmed Ms Suu Kyi would soon meet powerful army chief Min Aung Hlaing, with whom she has long had strained ties.

Some 740,000 Rohingya fled over the border into Bangladeshi camps as the military swept through northern Rakhine state.

Myanmar says the operations were justified to root out Rohingya militants and insists its own committees are adequate to investigate allegations of abuse. 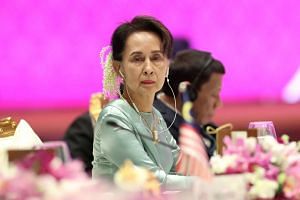 The ICJ case will be the first of several international legal attempts to bring Myanmar to justice over the Rohingya crisis.

Political observer Soe Myint Aung said he did not think Ms Suu Kyi would be heading to The Hague at the military's behest, "although she may wish they reciprocate her actions of goodwill".

Ms Suu Kyi continues to enjoy huge support inside Myanmar, where the Rohingya are widely viewed as illegal immigrants.

Many praised her decision on Facebook and supporters even plan a rally in solidarity.

"Our leader is showing courage by taking responsibility," said Mr Myo Nyunt, spokesman for Ms Suu Kyi's National League for Democracy (NLD), admitting that the party had not been aware of the surprise decision.

Even though the move will play well domestically, it will also "require her to defend the indefensible, raising further questions about her moral - and potentially legal - culpability", warned independent analyst Richard Horsey.

Myanmar has not signed up to the ICC and therefore rejects its authority.

Rights groups have meanwhile filed a third lawsuit in Argentina in which Ms Sun Kyi was personally named.