The Philippine military urged Muslim militants still holed up in the southern city of Marawi to surrender as security forces, backed by armoured vehicles, artillery and attack helicopters, continued their push to dislodge the insurgents and free trapped civilians.

"We call on the remaining terrorists to surrender while there is an opportunity... Not surrendering will mean their sure death," the military's spokesman, Briga- dier-General Restituto Padilla, said yesterday.

The military said on Monday that its men have taken back most of Marawi City.

The call to surrender came as the insurgents' hostages pleaded with the government to stop bombarding rebel positions.

The siege of Marawi City is in its second week after about 100 militants from the Maute group attacked the lakeside city on May 23. The attack followed a raid by a special forces team at an apartment where a top terrorist leader, Isnilon Hapilon, was believed to be hiding.

The Islamic State in Iraq and Syria (ISIS) has designated Hapilon as the "emir" of South-east Asia.

Despite a sustained assault by the military over the past eight days, the militants still control pockets of the city. Marines and commandos spent yesterday clearing rebel positions house by house, and street by street. 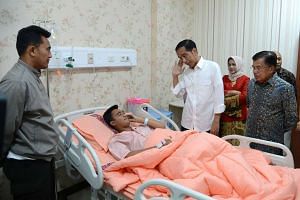 President Rodrigo Duterte has declared martial law in Marawi and across the Mindanao island group.

The death toll has exceeded 100, with 19 civilians and at least 65 rebels killed. The government lost 17 soldiers and three policemen.

The Philippine military has said foreign fighters, including Malay- sians, Indonesians and Singaporeans, are involved in the fighting.

Meanwhile, a Catholic priest who was taken hostage last week has appealed to Mr Duterte to consider the plight of the captives and stop the military operation.

Father Teresito "Chito" Soganub, the city's vicar-general, said there were about 240 other captives.

"We are asking your help to please give what your enemies are asking for," he said in a video clip shown on a Telegram channel used by ISIS.

The video showed the priest, wearing a black shirt and trousers, standing in front of a razed building. As he was speaking, gunfire could be heard in the background.

"They simply are not asking for anything, just to withdraw your forces... and to stop the air strikes, your air attacks, and stop the cannon," he pleaded.

Military chief Eduardo Ano said on Monday that the militants had intended to raze Marawi, as part of a plan to launch violent attacks during the holy month of Ramadan to earn recognition as a regional branch of ISIS.

"They wanted to show the world that there is an ISIS branch here which can inflict the kind of violence that has been seen in Syria and Iraq," he said, insisting that the raid on Hapilon's suspected hideout disrupted that plan.

A version of this article appeared in the print edition of The Straits Times on May 31, 2017, with the headline 'Militants urged to surrender as govt reclaims most of Marawi'. Subscribe
Topics:
More
Whatsapp Linkedin FB Messenger Telegram Reddit WeChat Pinterest Print Purchase Article Copy permalink