Philippine drug enforcers have seized around 160kg of methamphetamine valued at more than 1.1 billion pesos (S$28 million) at an upscale enclave just south of the capital Manila where prominent lawmakers, politicians, celebrities and business executives live under tight security.

Three Chinese nationals and a Chinese-Filipino interpreter were arrested late on Tuesday in separate raids in Ayala Alabang Village, a posh gated community in Muntinlupa city, and at a nearby shopping mall. Those arrested were Go Kei Kei, 40, Chua Kian Kok, 43, Wu Yi, 19, and their interpreter Emmanuel Pascual, 79.

The drugs, a powerful methamphetamine locally known as shabu, were concealed in tea wrappers and biscuit cans, similar to those in seizures in Malaysia, Thailand and Myanmar.

Philippine Drug Enforcement Agency chief Aaron Aquino said this suggested that an international syndicate running drugs through the notorious "Golden Triangle", which straddles the borders of Laos, Thailand and Myanmar, was behind the trafficking.

The drug haul was the second-largest this year - a sign of how the problem has persisted despite President Rodrigo Duterte's crackdown on the narcotics trade.

Mr Aquino said drug traffickers were moving their bases from more public areas and rural warehouses to upscale residential estates, condominiums and buildings, where private security firms and guarded residential groups made it difficult for law enforcers to gather intelligence.

Law enforcers have had to jump through hoops before they can get inside plush gated communities, Metropolitan Manila police chief Guillermo Eleazar told the online news site Rappler. 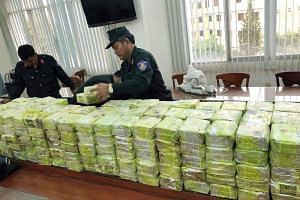 "Gated subdivisions, for all you know, there are drug users there... but we don't have that many operations there because we have to be evidence-based. We can't operate without information. There's no case build-up," he said.

So far this month, drug enforcers have seized about 20 million pesos worth of shabu, Ecstasy, cocaine and marijuana found in two condo units doubling as warehouses.

A restaurant owner who police said was among the biggest suppliers of party drugs to celebrities and models was killed in one raid.

Representative Rufino Biazon, who lives in Ayala Alabang Village, said government agents should be allowed to do "house-to-house" searches of rented properties inside fenced-off communities.

"At this time, each and every rented or vacant property should be checked and profiled to rule out its use by criminal elements," he added.

A long-time resident of Ayala Alabang who lives near where the stash of shabu was seized told The Straits Times that she agreed with Mr Biazon, provided the agents are accompanied by community-hired security personnel.

"It's hard to trust the police. They're not beyond planting evidence," she said.

Mr Duterte has elevated drugs to a national security concern and launched a crackdown that has killed more than 5,000 mostly poor drug suspects in reported clashes with the police since he took office in mid-2016.

Last week, he drew fresh criticism when he publicly named 46 government officials, including three congressmen, whom he alleged were involved in illegal drugs but have not been criminally charged.