Francis Chan US Defence Secretary James Mattis pitched his visit to Indonesia as an opportunity for him to, in his own words, "listen... and understand" what the United States can do for South-east Asia's largest nation.

His trip, which includes a stop in Vietnam, comes amid concerns over an erosion of United States military presence in this part of the world, while China continues its own aggressive expansion in the region.

Still, Jakarta rolled out the red carpet, literally, for Mr Mattis, who was granted face-time not only with Indonesia's top three defence officials, but also President Joko Widodo on Tuesday.

Washington will see this as a positive sign from the vast archipelagic state, home to the world's largest Muslim population.

Indonesia can be a key US partner when addressing challenges ranging from rising Islamic extremism to maritime security, as well as to counter China's territorial ambitions in South-east Asia. 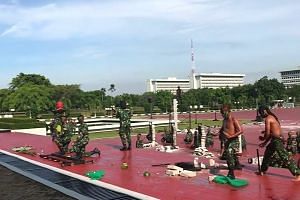 Much of the NDS will remain secret, but an unclassified summary reveals a clear prioritisation of China and Russia as strategic threats or competitors over, say terrorism, as the primary concern for US national security.

It also includes a focus for the US to build partnerships and strengthen alliances with countries such as Indonesia.

To that end, the retired four-star US Marines general had to do more than just lend a ear during his visit.

In remarks after meeting Defence Minister Ryamizard Ryacudu, Mr Mattis referred to a part of the contested South China Sea as the North Natuna Sea - a move likely to be noted by Beijing.

China claims almost all the South China Sea, while Vietnam, the Philippines, Malaysia, Brunei and Taiwan have overlapping claims. Indonesia was never a party to the territorial dispute, but had to assert itself after Beijing claimed parts of the waters off the resource-rich Natuna Islands are part of its "traditional fishing grounds".

In response, Jakarta named waters in its Exclusive Economic Zone, just off its northern perimeter, the North Natuna Sea.

The US acceptance of the name, which has no legal consequence, is a massive geopolitical win for Indonesia as it seeks to politely fend off Chinese ambitions in the waterway, through which about US$5 trillion (S$6.5 trillion) in cargo passes every year.

Another boost to US-Indonesia defence relations was when Mr Mattis told Mr Ryamizard, a fellow four-star general, that the US military may consider working with Indonesian Special Forces, better known as Kopassus, again.

The US had placed restrictions on Kopassus following allegations of past human rights violations by its troops in the late 1990s.

The lifting of the ban would be well-received by Indonesia's military elite, including several retired generals who play key roles in the Joko Widodo administration.

Mr Mattis will also be taking back to Washington a wish-list from Jakarta, which includes the sale of advanced weapons systems and help to set up an intelligence network to support the region's counter-terrorism efforts, as well as calls for the US not to provoke North Korea and rethink its position on Jerusalem.

This presents the US with an opportunity to not only reinforce ties with Indonesia but also show that Mr Mattis' visit is a harbinger of enhanced US engagement in Asia.

A version of this article appeared in the print edition of The Straits Times on January 25, 2018, with the headline 'Mattis' visit a harbinger of enhanced US engagement in Asia?'. Subscribe
Topics:
More
Whatsapp Linkedin FB Messenger Telegram Reddit WeChat Pinterest Print Purchase Article Copy permalink