Despite a strong showing, Senator Ferdinand Marcos Jr is falling short of bagging the nation's second-highest post, setting back a political comeback meant to rehabilitate the Marcos name.

Mr Marcos is trailing Representative Leni Robredo, widow of a popular Cabinet minister and President Benigno Aquino's bet to become vice-president. He was trailing yesterday by more than 200,000 votes in an unofficial count sanctioned by the Commission on Elections (Comelec).

The namesake of the late dictator, who ruled the nation and plundered its coffers for nearly two decades till he was ousted by a popular uprising in 1986, had sought to stop the unofficial count. 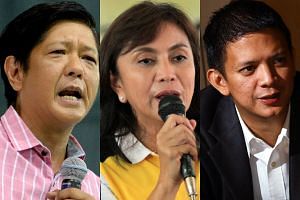 Mr Marcos, 58, claimed the Comelec's server had been tampered with to push Ms Robredo's votes ahead of his, but did not offer proof.

Responding to the allegation, Ms Robredo, 52, said at a news briefing: "It's so unfair to accuse someone of cheating without substantiating your claim."

Mr Marcos urged supporters who had been calling on social media to march to the streets "to stay calm. Cool it".

"You can be sure that we will investigate this and the truth will come out," he said.

Political analyst Prospero de Vera of the University of the Philippines said Ms Robredo benefited from the collapse of another candidate's campaign.

"I think what happened is that the campaign of (Senator Francis Escudero) simply collapsed… Leni ate into votes of (Escudero), not into the votes of (Marcos)," he said. Ms Robredo and Mr Escudero come from the same province, Bicol.

Since returning from exile in 1991, Mr Marcos has been riding on the loyalty to his father of a voting bloc of nine million to stage a remarkable political comeback.