MARAWI CITY, Philippines (Reuters) - Dozens of foreign terrorists have fought side-by-side with Islamic State in Iraq and Syria (ISIS) sympathisers against security forces in the southern Philippines over the past week, evidence that the restive region is fast becoming an Asian hub for the ultra-radical group.

A Philippines intelligence source said that of the 400-500 marauding fighters who overran Marawi City on the island of Mindanao last Tuesday (May 23), as many as 40 had recently come from overseas, including from countries in the Middle East.

The source said they included Indonesians, Malaysians, at least one Pakistani, a Saudi, a Chechen, a Yemeni, an Indian, a Moroccan and one man with a Turkish passport.

"IS is shrinking in Iraq and Syria, and decentralising in parts of Asia and the Middle East," said Rohan Gunaratna, a security expert at Singapore's S. Rajaratnam School of International Studies, using an alternative acronym for ISIS. "One of the areas where it is expanding is South-east Asia and the Philippines is the centre of gravity."

Mindanao has been roiled for decades by bandits, local insurgencies and separatist movements. But officials have long warned that the poverty, lawlessness and porous borders of Mindanao's predominantly Muslim areas mean it could become a base for radicals from South-east Asia and beyond, especially as ISIS fighters are driven out of Iraq and Syria. 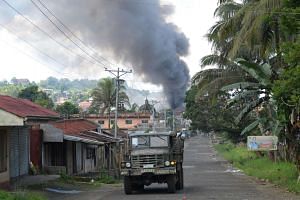 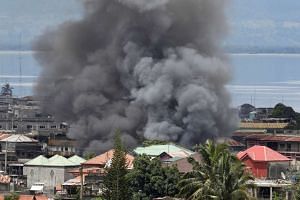 Although ISIS and groups affiliated to the movement have claimed several attacks across South-east Asia in the last two years, the battle in Marawi City was the first long drawn-out confrontation with security forces.

On Tuesday (May 30), a week after the fighting began, the government said it was close to retaking the city.

Last year, South-east Asian militants fighting for ISIS in Syria released a video urging their countrymen to join the cause in the southern Philippines or launch attacks at home rather than attempting to travel to Syria.

Jakarta-based terrorism expert Sidney Jones passed to Reuters some recent messages in a chatroom of the Telegram app used by ISIS supporters.

In one, a user reported that he was in the heart of Marawi City where he could see the army "run like pigs" and "their filthy blood mix with the dead bodies of their comrades".

He asked others in the group to pass information on to the Amaq News Agency, a mouthpiece for ISIS.

Another user replied, using an Arabic word meaning pilgrimage: "Hijrah to the Philippines. Door is opening."

The clash in Marawi City began with an army raid to capture Isnilon Hapilon, a leader of Abu Sayyaf, a group notorious for piracy and for kidnapping and beheading Westerners.

Abu Sayyaf and a relatively new group called Maute, both of which have pledged allegiance to ISIS, have fought alongside each other in Marawi City, torching a hospital and a cathedral, and kidnapping a Catholic priest.

The urban battle prompted Philippines President Rodrigo Duterte to impose martial law across the whole island of Mindanao, an area roughly the size of South Korea with a population of around 21 million.

The head of the Malaysian police force's counter-terrorism division, Ayob Khan Mydin Pitchay, named four Malaysians who are known to have travelled to Mindanao to join militant groups.

Among them were Mahmud Ahmad, a Malaysian university lecturer who is poised to take over the leadership of ISIS in the southern Philippines if Hapilon is killed, he said.

Security expert Gunaratna said that Ahmad has played a key role in establishing ISIS' platform in the region.

According to his school's research, eight of 33 militants killed in the first four days of fighting in Marawi City were foreigners.

"This indicates that foreign terrorist fighters form an unusually high component of the IS fighters and emerging IS demography in South-east Asia," Gunaratna said.

According to an intelligence brief seen by Reuters, authorities in Jakarta believe 38 Indonesians travelled to the southern Philippines to join ISIS-affiliated groups and about 22 of them joined the fighting in Marawi City.

However, an Indonesian law-enforcement source, speaking on condition of anonymity, said the actual number of Indonesians involved in the battle could be more than 40.

Indonesia officials believe some militants might have slipped into Marawi City under the cover of an annual gathering of the Tablighi Jamaat just days before the fighting erupted. The Tablighi Jamaat is a Sunni missionary movement that is non-political and encourages Muslims to become more pure.

An Indonesian anti-terrorism squad source told Reuters that authorities have beefed up surveillance at the northern end of the Kalimantan and Sulawesi regions to stop would-be fighters travelling by sea to the southern Philippines and to prevent an influx of others fleeing the military offensive in Marawi City.

"The distance between Marawi and Indonesian territory is just five hours," the source said. "It should not get to the point where they are entering our territory and carrying out such (militant) activities."