KOTA KINABALU (THE STAR/ASIA NEWS NETWORK) - Many areas in Sabah are flooded, with the Kota Belud district being the worst hit.

Thousands of villagers are believed to have been affected by the flood waters.

An aerial view of the Kota Belud showed the district submerged in water, as the rain had been continually pouring for almost a week now.

The rains and strong winds are expected to persist until Saturday (Oct 21), according to the Meteorological Department's website.

It is understood that the storms are due to Typhoon Lan in the Philippines.

Universiti Malaysia Sabah (UMS) geologist, Dr Felix Tongkul, said the floods can also be seen as a result of the 2015 earthquake and the hundreds of aftershocks that have loosened earth and boulders from the mountains. 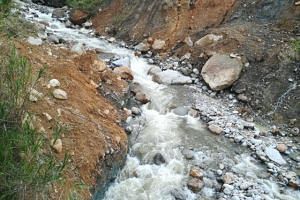 The Kota Belud district is situated close to mountainous areas.

"Almost all the villagers along the Kadamaian river suffered severe flooding," he said.

"It appears that my worst fear on the post impact of the June 5 Mount Kinabalu earthquake in 2015 has become a reality," he said.

Tongkul said he was told by some villagers that even areas that have never experienced flooding were hit this time.

He said the series of debris and mud floods which occurred after the quake had made the Kadamaian river channel shallower due to sedimentation.

"This is making the situation and floods worse each time it rains as the river can no longer cope with the huge amount of rain especially water that flows from Mount Kinabalu," he said.

The numbers of displaced villagers in Kota Belud is also increasing, with the Civil Defence Department recording some 1, 729 people being evacuated as of Saturday (Oct 21) morning.

He said the authorities were facing difficulties in ascertaining the extent of flooding as many roads were not passable due to the floods.

However, Mohd Izaimi said they were working closely with the various rescue agencies to find alternative routes to evacuate villagers.

In Tuaran, about 300 people have been evacuated as well.