"We need a lot of advice from Singapore, and I'm sure the advice will go a long way to help us solve our problem, especially water," Mr Duterte told Singapore's new Ambassador to the Philippines, Mr Gerard Ho, on Tuesday.

Mr Ho was presenting his credentials to the Philippine President.

Mr Duterte was especially interested in Singapore's experience with desalination.

"I know Israel and Singapore (have) the best operating (desalination) machines," he told Mr Ho.

Singapore has three desalination plants that produce up to 490 million litres a day, enough to cover up to 30 per cent of its water needs.

Desalination, though, is too expensive to be viable for the Philippines. Experts estimate that it would cost more than US$2 (S$2.70) per cubic metre of water.

Large parts of the Philippine capital are in the grip of a water crisis. 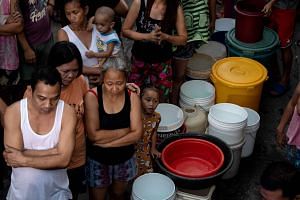 More than 13 million people live in Metro Manila, which spans 16 cities and one town.

Taps have run dry for over two weeks for some six million customers of privately held concessionaire Manila Water. People have waited in long queues for hours in front of water trucks, deep wells and stores selling distilled water across metropolitan Manila.

In hearings in Congress on Monday and Tuesday, executives of Manila Water owned up to the "supply deficit situation".

Taps are running dry because Manila Water, which supplies half of Metro Manila, does not have access to enough water sources to cover growing demand.

But, following the recent long dry spell, the water level at La Mesa plunged to its lowest level in 21 years, and Manila Water could no longer draw a sufficient volume from it.

Government regulators are blaming Manila Water for failing to augment its capacity and tap new sources, and relying solely instead on La Mesa and on water rationing.

Company officials, however, have responded by claiming that the government had yet to approve its requests to build more reservoirs and water treatment plants, as well as proposals to build new dams.

Mr Duterte summoned officials in charge of water supplies for a dressing down on Tuesday.