MANILA • Facing a United Nations human rights investigation into its bloody war on drugs, the Philippines presented a new death toll yesterday to counter much higher numbers given by critics.

But human rights groups have accused the government of using partial data to mislead and said that even the official figure of more than 5,500 police killings in anti-drug operations was far too high and there must be accountability for every death.

President Rodrigo Duterte's administration has challenged activists' death tolls of the three-year-old drug war that rise as high as 27,000.

Under the banner of #TheRealNumbersPH, officials told a news conference that 5,526 "drug personalities" had died in anti-drug operations between July 1, 2016, and June 30 this year. That was below a previous police figure of more than 6,700 dead.

The drug war is facing new scrutiny since the UN Human Rights Council adopted a resolution a week ago to investigate the killings. The government rejects accusations of systematic abuses including executions, planted evidence and falsified reports.

Ms Michelle Bachelet, the UN human rights chief, said last month that even the official number would be "a matter of most serious concern for any country".

"Outside the police, there's no one entity doing the tracking. There are NGOs that are trying but they can only do it based on media reports."

Some of the higher estimates are based on a 2017 official report on "Key Accomplishments" of Mr Duterte's administration that included 16,355 "homicide cases under investigation" on the same page as the nearly 4,000 dead in police operations at that time. 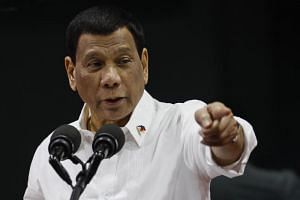 'You must be stupid': Philippines' Duterte says he won't be tried by international court

Then, last year, the Supreme Court asked the government to explain more than 20,000 deaths during the drug war.

"I just say at least 20,000 dead," said Ms Ellen Tordesillas of Vera Files, a non-profit fact-checking group. "All we have done is to debunk the government figures with their own figures."

The presidency's Ms Rafael said that official data no longer included "homicide cases under investigation" because those were not necessarily related to the drug war.

That is where critics say suspicious killings could appear - including any carried out by police outside regular operations or by vigilantes with alleged police links.

One death which will not be counted is that of 23-year-old Jaybee Castor, whose family wept over his coffin yesterday.

Abducted by masked men in June, he was found dead north of Manila this month with seven sachets of methamphetamine and a sign reading: "I am an addict and a thief. Do not tolerate me."

Ms Rafael acknowledged that the official drug war numbers would also not include three-year-old Myca Ulpina, shot dead last month during a drug raid. Police have said four officers will face charges over that killing.

The Philippine officials did not have figures for the number of other non-suspects killed in the drug war. They have said that the number of killings was small relative to the arrest of more than 193,000 "drug personalities" since the anti-drug war began.

But the rate of successful prosecution of drug cases is low - less than 53 per cent in 2017, according to Department of Justice data. The rate for all cases was over 72 per cent.