MANILA (PHILIPPINE DAILY INQUIRER/ASIA NEWS NETWORK) - He would be more than happy to stick his neck out, President Rodrigo Duterte said, should the International Criminal Court (ICC) decide to hang him one day.

"For the things I have said, ordered and done, I am willing to put my neck dito sa mga bagay na ito (for these things)," he thundered during a campaign rally in Isabela province last week.

"Baka balang araw itong mga ICC na ito, itong mga bugok na ito (Maybe someday, this ICC, these idiots) if they decide to hang me I would be very glad to go."

And yet, starting today (March 17), barring any last-minute intervention from the Supreme Court (a doubtful prospect), the Philippines will no longer be a member of the ICC - because Mr Duterte, in the face of a possible investigation by the court into the massive casualties of his signature war on drugs, ordered the country's withdrawal from it a year ago.

The neck is willing to face up to the ICC, apparently, but not much else in the President.

The withdrawal puts to waste an 11-year effort across three presidencies to have the Philippines sign the Rome Statute or the founding document of the ICC, which gives it jurisdiction to prosecute individuals for the international crimes of genocide, crimes against humanity, war crimes and crimes of aggression.

The Philippines ratified the Statute in 2011. 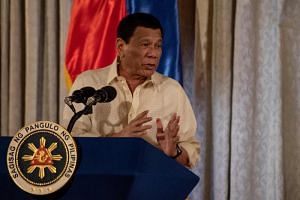 Another complaint to ICC against Philippines President Duterte over extrajudicial killings

Three countries - all of them African states, namely, Burundi, South Africa and the Gambia - had previously announced their withdrawal from the ICC, but the Gambia and South Africa eventually rescinded their decisions.

In a 15-page statement released on March 14, 2018, serving notice that the Philippines was withdrawing from the ICC, Mr Duterte insisted that the mass deaths from his drug war did not constitute any of the crimes falling under the ICC's jurisdiction: "The deaths resulting in the process of making lawful arrests arising from the violent resistance of the suspects that endangered the lives of the police officers cannot be said to have been committed against a national, ethical, racial or religious group."

Callamard had decried the rampant drug-related extrajudicial killings that are now estimated to number more than 20,000; in true Duterte fashion, the President's response was: "Kung imbestigahin mo ako, sampalin kita (if you're going to investigate me, I will slap you)."

Human rights and religious groups, as well as families of alleged EJK victims, have submitted at least four communications against Mr Duterte before the ICC.

Despite the administration's insistence otherwise, the Court maintains that it retains jurisdiction over crimes that were committed while the Philippines was still an ICC member - that means incidents between August 2011 and March 2019 - and can continue its preliminary probe into the Duterte administration's conduct covering this period even after the Philippine withdrawal has taken effect.

Even as the President and his advisers may imagine he can successfully escape accountability by yanking the country away from the ICC's gaze, it's ordinary Filipinos that may find themselves at the losing end of this cynical and self-serving political maneuver.

Last year, lawyer Barry Gutierrez argued before the Supreme Court that the ICC provides a "safety mechanism" for Filipinos who want to seek redress for their grievances, especially when local courts are "unable or unwilling to actually provide justice to victims of these serious crimes enumerated in the ICC."

Another legal expert, senatorial candidate Chel Diokno who founded the De La Salle University College of Law, warned that the withdrawal virtually gives the Duterte administration carte blanche impunity, as it "deprives… citizens of one remedy to grave and extraordinary crimes… This is removal of the protection of ordinary Filipinos against government abuse. This will cause injustice and lack of accountability."

The withdrawal may impact the country in other ways.

The Philippines, for instance, can no longer make China accountable for crimes of aggression in the West Philippine Sea once it's out of the ICC, pointed out Senior Associate Justice Antonio Carpio.

All these, because the President refuses to account for the gravity and consequences of his brutal domestic policy, and has decided, in his pique at the global rebuke, to drag the country down the rabbit hole with him.

The Philippine Daily Inquirer is a member of The Straits Times media partner Asia News Network, an alliance of 23 news media organisations.