The X70, a fully imported version of Geely's Boyue, makes up over half of national carmaker's sales

Once-ailing Malaysian carmaker Proton is seeing a turn in its fortunes since its Chinese partner Geely brought the X70 sport utility vehicle to the Malaysian market last December.

The X70 - a rebadged version of Geely's Boyue - now makes up over half of Proton's sales, with more than 20,000 cars booked as at end-February and waiting times extending up to three months.

"Our next target will be to set new six-month and full-year registration numbers, and we are confident of achieving them," Proton chief executive Li Chunrong said in a statement last Wednesday. The national carmaker did not give details of these targets.

The X70 is extremely popular because it is fully imported and retails at an attractive price point. Geely's Boyue is known as China's best-selling SUV.

Automotive analysts say the positive response to the X70 indicates a probable turnaround of fortunes for Proton, but they caution that it is the automaker's ability to deliver top-notch locally assembled cars that will determine its future.

"The true test will be to build a local version of the car and compete with Perodua on fairer ground," said one analyst, referring to Malaysia's other national carmaker which leads the local market in total vehicle sales.

Proton is already expanding its plant in Perak to cope with producing new car models and upgrading its service centres nationwide.

Buyers of the X70 say it is priced considerably lower than similar SUVs in the compact segment.

"It's a Proton car but it's also not really a Proton car at the same time. There's a different expectation for the X70," said Mr Alexander Teoh, 40, a human resources manager. 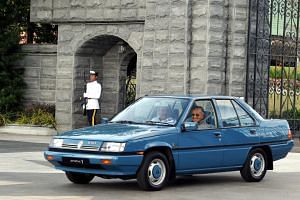 In June 2017, when Geely acquired a 49.9 per cent stake in Proton - the balance is held by local conglomerate DRB-Hicom - the move was severely criticised by Tun Dr Mahathir Mohamad.

Proton was Dr Mahathir's brainchild during his first stint as prime minister from 1981 to 2003, and he described the 2017 deal brokered by the Najib Razak administration as bad for the country.

"I am sure Proton will do well... but I cannot be proud of the success of something that does not belong to me or my country," he said then.

At the launch of the X70 last December, however, the 93-year-old statesman who is now serving his second stint as Prime Minister praised the collaboration with Geely.

"Maybe after this, the cars will be conceptualised, designed, tested and built as a truly, 100 per cent Malaysian car in the future... this can be achieved with Proton's cooperation with Geely," he was quoted as saying in the New Straits Times.

Proton ranked fourth in total vehicle sales last year, behind Perodua, Honda and Toyota. Its 2018 sales stood at 64,744 units, more than a quarter of Perodua's total.

The automotive analyst said: "Perodua will continue to lead for the next few years and that's understandable. Proton's problems go deep and they need time to resolve these."

In 2017, the government revealed that Proton had received over RM15 billion in financial assistance since 1984, with most of the funds used to cover its losses from poor sales and high costs.

Geely's entry is expected to turn things around.

Another automotive analyst said the technology injection into Proton is more advanced than what is available in the current Malaysian market and could help the carmaker expand its market share.

Mr Li told automotive blog Paultan.org last December: "Proton will enter segments with potential that it wasn't represented in before this. Our goal is singular: to improve Proton's condition and restore it to its respected position."