KUALA LUMPUR (BLOOMBERG) - A sex scandal has laid bare tensions between the likely successors to Malaysia's Prime Minister Mahathir Mohamad - and the victor looks set to be Tun Dr Mahathir himself.

The 94-year-old, who said he would hand over to former rival Anwar Ibrahim only once the country is on good footing, may extend his stay in power as the ruling party struggles to contain internal rifts.

The spat between Datuk Seri Anwar - the Parti Keadilan Rakyat (PKR) leader - and his deputy Azmin Ali spilled into the open over a series of sex videos.

Neither of them look good coming out of the episode. Datuk Seri Azmin, whom analysts view as the prime minister's favourite for the role, is beholden to Dr Mahathir as long as he's possibly implicated in the videos, said Mr Oh Ei Sun, a senior fellow with Singapore Institute of International Affairs.

On the other hand, Mr Anwar's political career could be terminated if he's found to be behind the clips.

The videos, circulated in June, allegedly featured Mr Azmin engaged in sexual acts with another man.

Malaysia's police said its analysis failed to link the people in the videos with the accused minister, and concluded that a political party leader was the mastermind behind the clips. The police, who didn't name the leader or the party linked to the videos, remanded the political secretary to Mr Anwar last week.

Dr Mahathir's response to the scandal was blunt: "I don't have to think about this," he said when asked by reporters to comment on the scandal on Thursday (July 18). He added, "I have lots of other things to think about including answering your questions."

Still, the prime minister stands to benefit the most. 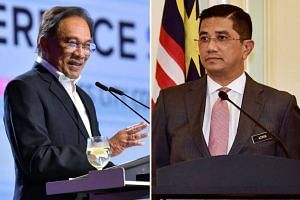 Anwar-Azmin feud: My loyalty has a limit, says Azmin

"Mahathir also has his own political interest, which is to keep the prime minister post on his own accord without having to submit to the people's calls to retreat," said Professor Awang Azman Awang Pawi, a politics expert at the University of Malaya.

Last week, Dr Mahathir's approval rating rose to its highest point since September, according to the Merdeka Centre, a local opinion research institution. Support for the premier rebounded from 46 per cent in March, an all-time low, up to 62 per cent in June, while the approval for ruling coalition Pakatan Harapan (PH) remained unmoved at 41 per cent, the report said.

Before his current stint in power, Dr Mahathir already held the title of Malaysia's longest-serving premier. He held the top post for 22 years, played political king maker after stepping down, then continued to speak his mind on where he believed the country should go.

He resigned from the Barisan Nasional coalition, which ruled Malaysia for six decades until 2018, amid the 1MDB scandal and joined forces with then-opposition PH.

The coalition, whose name translates to Pact of Hope, is composed of four disparate parties with contrasting views, including a majority ethnic Chinese party and a Malay nationalist party. With Dr Mahathir at the helm, they mustered a shock election win last May, after failing to do so at the 2013 poll with Mr Anwar leading the coalition.

The recent scandal came on the heels of a key win for the government, which managed to secure a two-third majority to push through a constitutional amendment in order to lower the minimum voting age to 18. It was one of the coalition's campaign promises.

But the nonagenarian can't stay in power forever - even though he was spotted riding a tandem bicycle around the Sepang International Circuit just days after turning 94 in July.

"Eventually Mahathir would probably like for his son to succeed him, but the prospect of that is some ways off - most Malaysian politicians say maybe two general elections away," said Mr Aaron Connelly, a research fellow at the International Institute for Strategic Studies.

The prime minister's son Mukhriz Mahathir, who is also chief minister for the state of Kedah, downplayed his ambitions for the top post in a July interview with Nikkei. He said the consensus in PH is for Dr Mahathir to be given enough time to fix the economy and state finances, according to the newspaper.

It's unclear whether Dr Mahathir's abandoned plans to transfer power to either Mr Azmin or Mr Anwar. "But even with the scandal, he doesn't have many better options," said Mr Connelly.