Malaysia's King yesterday called for national unity as he opened the first session of the country's Parliament after the landmark May 9 elections.

"All quarters should... find common ground, not differences, and work together for the people's welfare and the nation's survival," Sultan Muhammad V said in his royal address before a packed chamber of the upper and lower houses.

He called on members to preserve and strengthen social cohesion and harmony, saying: "Negative elements and acts that threaten our integrity and harmony should be eradicated. Stop bringing up sensitive issues between races."

The King also welcomed the proposal to form a consultative council for people's harmony that would see to programmes to encourage greater unity and integration.

The proposal is part of the election manifesto of the Pakatan Harapan (PH) coalition, whose historic win over Barisan Nasional (BN) saw the country's first transition of power since independence in 1957.

The King's call to strengthen harmony came as some members of the opposition, now dominated by the Malay majority, sought to stoke tensions by questioning the new government's appointment of non-Malays to prominent posts - those of finance minister, law minister, chief justice and attorney-general.

As the session began, a protest rally organised by Umno Supreme Council member Lokman Adam urged supporters to rise against what he said was the PH government's stifling of the King's voice, and of Malay rights. Police blocked the demonstrators from marching towards Parliament.

On Monday, BN and Parti Islam SeMalaysia MPs had walked out of the chamber as Speaker Mohamad Ariff Md Yusof was sworn in, claiming that his appointment did not follow procedure. 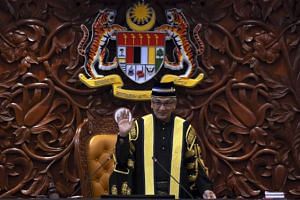 Yesterday, Sultan Muhammad V began his speech by alluding to the episode, saying: "You may all be seated, and don't run away."

He went on to thank the Election Commission and government agencies for ensuring smooth elections, and congratulated the elected MPs: "The people have made their decision. All parties should accept this with open hearts, and not be emotional or have their minds clouded by slander and narrow sentiment."

He urged the private sector to work with the government to improve people's welfare, saying: "Championing the rights of marginalised groups should not be seen as racial discrimination, but an effort to right social injustice."

The government, he said, had to find strategies to tackle challenges, including an uncertain global economy and ensuring all citizens benefit from development, including in Sabah and Sarawak.

And he hoped that steps to abolish the goods and services tax (GST), stabilise petrol prices and provide financial aid to low-income groups would ease the burden of higher costs on the people.

"I can see that people are disappointed that the GST has been zero-rated, but the prices of things have not gone down," he told reporters, adding that prices of goods are likely to rise when the sales and services tax (SST) is introduced as a measure to make up for loss of tax revenue.

Further government appointments were also made yesterday. New senator P.Waythamoorthy, chairman of Hindraf, was sworn in as Minister in the Prime Minister's Department (National Unity and Social Well-being), while four other newly minted senators were sworn in as deputy ministers.

Khairy says he remains loyal to Umno despite sitting out protest